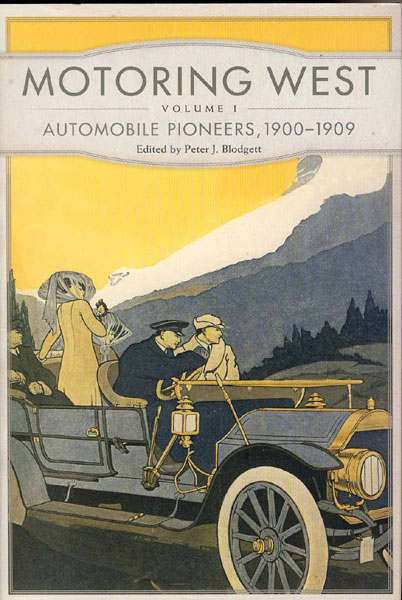 First edition. 8vo. Cloth, titles stamped in silver gilt on the front cover and spine, 360 pp., acknowledgments, editor's note, series introduction, introduction to Volume I, illustrated, map, index.In the first years of the twentieth century, motoring across the vast expanses west of the Mississippi was at the very least an adventure and at most an audacious stunt. As more motorists ventured forth, such travel became a curiosity and, within a few decades, commonplace. For aspiring western travelers, automobiles formed an integral part of their search for new experiences and destinations—and like explorers and thrill seekers from earlier ages, these adventurers kept records of their experiences. The scores of articles, pamphlets, and books they published, collected for the first time in Motoring West, create a vibrant picture of the American West in the age of automotive ascendancy, as viewed from behind the wheel. Documenting the very beginning of Americans’ love affair with the automobile, the pieces in this volume—the first of a planned multivolume series—offer a panorama of motoring travelers’ visions of the burgeoning West in the first decade of the twentieth century. Historian Peter J. Blodgett’s sources range from forgotten archives to company brochures to magazines such as Harper’s Monthly, Sunset, and Outing. Under headlines touting adventures in “touring,” “land cruising,” and “camping out with an automobile,” voices from motoring’s early days instruct, inform, and entertain. They chart routes through “wild landscapes,” explain the finer points of driving coast to coast in a Franklin, and occasionally prescribe “touring outfits.” Blodgett’s engaging introductions to the volume and each piece couch the writers’ commentaries within their time. As reports of the region’s challenges and pleasures stirred interest and spurred travel, the burgeoning flow of traffic would eventually and forever alter the western landscape and the westering motorist’s experience. The dispatches in Motoring West illustrate not only how the automobile opened the American West before 1909 to more and more travelers, but also how the West began to change with their arrival. As new, unread copy in dust jacket.

Catalogue No. 223. Rebekah Lodge Supplies
by The Cincinnati Regalia Co

Cowpokes, Nesters, & So Forth.
by Judge Orland L. Sims

The Fall Of A Black Army Officer. Racism …
by Charles M. Robinson Iii

A Lone Star Cowboy.
by Charles A. Siringo