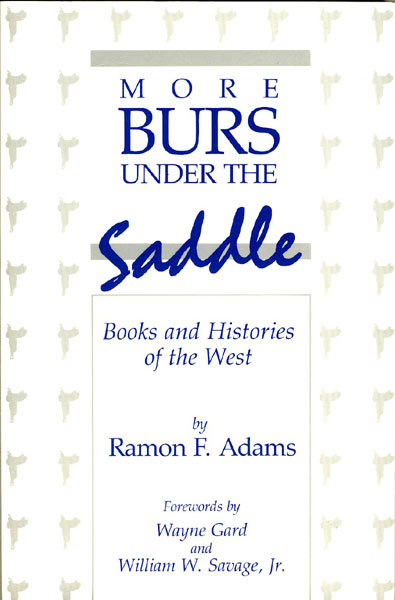 More Burs Under The Saddle. Books And Histories Of The West

First paperback edition. Originally published in hardcover in 1979. Stiff, printed wrappers, xv, 182 pp., foreword, introduction, double column, afterword, index. A Foreword to the paperback edition by William W. Savage, Jr. A "Foreword" to the First Edition by Wayne Gard.The author critically examines 233 titles of the western gunmen and outlaws, most of which rate as "burs under the saddle," and mostly published since 1964. Adams' concern is that writers of the outlaws and gunmen do additional research and stop compounding each other's errors into legend "The value of this book to writers and historians of the badman tradition cannot be overestimated, for Adams has replaced rumors, myths, and falsehoods with documented historical facts." Wayne Gard has provided a warm introduction in which he points out that Adams "was motivated not by any kind of jealousy or malice but rather by a desire to set the historical record straight and to provide guidelines for future writers." A fine, unread copy.

Faithful Unto Death, The James-Younger Raid On The …
by John J. Koblas