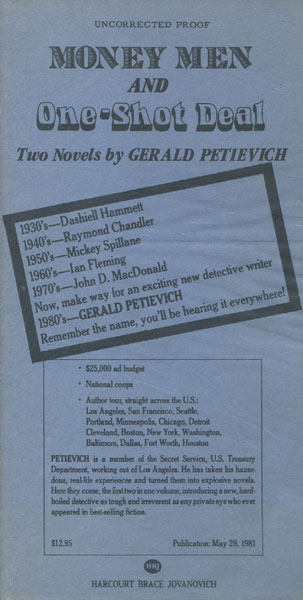 First edition. Author's first book. Uncorrected proofs. Fine in printed wrappers. These stories are set in Los Angeles, and are about two cases of Treasury Agent Charles Carr. He has a knack of irritating his agency superiors, mainly because he's successful in his own innovative and independent ways. In Money Men, Carr is working a stakeout when an undercover agent is murdered. Feeling responsible, Carr goes after the killers with a passion that far outreaches his duty. In One-Shot Deal, Carr is assigned to capture a brilliant and murderous counterfeiter who has managed to steal government security paper. His purpose is to forge $10 million in U.S. Treasury notes.

A Glass Of Milk
by Henry Kane