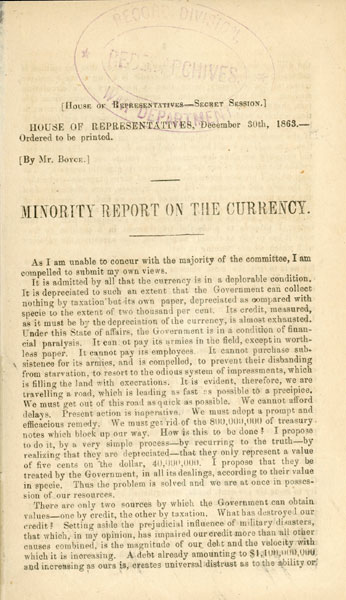 Minority Report On The Currency

First edition. 8vo. 4 - page document bound into a quarter cloth and boards binder. William Boyce wrote this minority report, a document which offers a realistic view of the state of the Confederate economy. It discusses the state of devalued currency and the inability to pay wages to the soldiers. Boyce's plan involves recognizing the actual worth of currency rather than its face value. "Tax Certificates" would be issued by the government, reducing the amount of currency in circulation. Boyce wants the Confederate government to 'deal candidly' with the people, to make known our necessities, and to appeal to their intelligence and patriotis to sustain us in a necessary measure for the public safety. Captured hand-stamped "Rebel Archives." Rare Confederate imprint and supposedly a secret document.

In The Beginnings ... A Bicentennial Religious History …
Rev. David A. Johnson [Edited By]