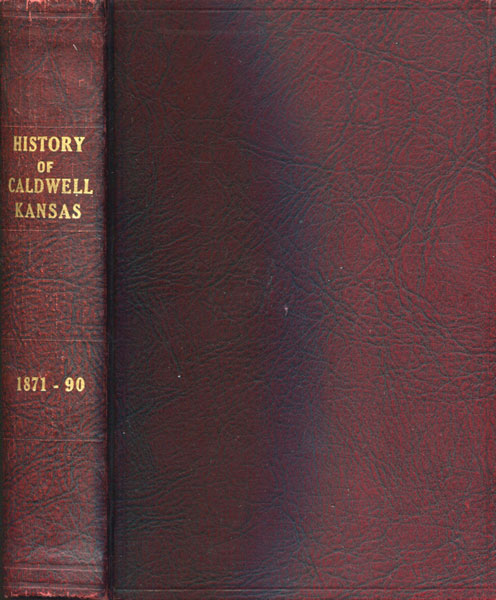 Midnight And Noonday Or Dark Deeds Unraveled. Giving Twenty Years Experience On The Frontier; Also The Murder Of Pat Hennesey, And The Hanging Of Tom Smith, At Ryland's Ford, And Facts Concerning The Talbert Raid On Caldwell. Also The Death Dealing Career Of Mccarty And Incidents Happening In And Around Caldwell, Kansas, From 1871 Until 1890

First edition. First printing with the word "Talbert" misprinted in the title. 8vo. Rebound in maroon cloth with new endpapers, and titles stamped in gold gilt on the spine [1-405 pp., 20.2 x 14.5 cm. frontispiece. three illustrations, "Author's Preface," index to chapters. "Talbert" mis-spelled in the title. Six Score 39 says "An extremely rare history of Caldwell during this vital period, when it was an important cattle town, and a first hand account of one of the roughest of the shipping terminals." Herd 843 says "Exceedingly rare." Streeter Sale 2030 says ".... rare ... this important account of the Kansas frontier. The work is usually known by the second edition of 1892." Adams One Fifty 56 says "The book contains much material on the gunmen and their gun battles in Cadlwell [sic] and tells of the Medicine Lodge bank robbery by Henry Brown and Ben Wheeler. I was fortunate enough in my early 1940s to pick up a copy of the first edition in California, and it is the only one I have ever seen." Inked Christmas gift inscription and dated "Dec. 25, 1891," else near fine, tight copy of the first issue of the first edition, with contents in very nice condition.

Red Lights In Wallace, Idaho: Prostitution And The …
by Jay Moynahan

A Kansas Hell, Or Life In The Kansas …
by John N. Reynolds

Myth, Mystery, Mayhem, And Other Weirdness On Route …
by Michael Karl Witzel