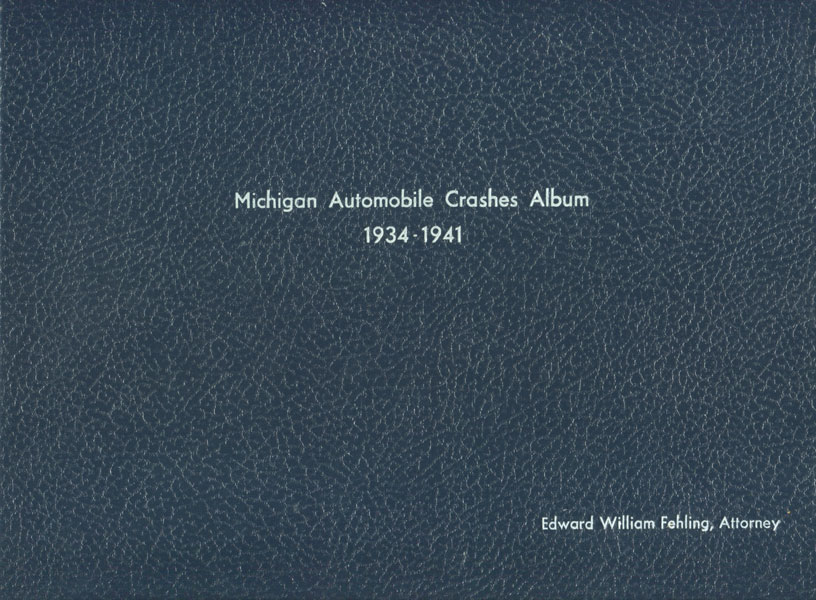 First edition. 9 1/2" x 12" x 1 3/4" recent black cloth, three position, post binder, with title and attorney's name stamped in silver on front cover. A remarkable archive of automobile crash photos assembled for Fehling in the 1930's and early 1940's during accident investigations. The models of vehicles include Oakland, Chevrolet, Nash, Plymouth, Ford, Pontiac, International Trucks, and others. Many of the images specify the date of the accident, occasionally the accident victims, as well as the commercial photographers who shot the images .... St. Johns, Michigan: O'Brien; Ball & Wanek; Calkins-Fletcher; Ward C. Morgan; John Mitchell, 1934-1941. 38 leaves (unnumbered), archival transparent polyester sleeves, with 41 silver gelatin photographs inserted, 38 sized 8" x 10," many of them linen backed, most with ink and/or typed annotations on versos, some with photographer's mark in negative in lower part of image, 3 sized 3 1/4" x 4 1/2" stapled to thick paper, with accident information written in margin, all with excellent strong contrast. This surprising archive of auto accident photos was assembled for use in civil court cases, and criminal trials, in Michigan during the years preceding World War II. They all show a remarkable amount of damage to the classic American steel automobiles from the period, including a 1938 Oldsmobile 2-door Coupe; 1937 Nash, 1934 Ford V8 Fordor Coupe; a 1935 International Truck which shows tremendous damage from an Oldsmobile; a crumpled 1936 Pontiac taken in Flint, MI by John Wanek, and signed by him; a 1935 Ford 2-door owned by George H. Thatcher of Detroit, MI in an accident June 18, 1935; a devastating accident involving Henry Van Oss, Sr. of White Cloud, MI, which resulted in the fatality of Elmer Chesebrough in June, 1940; overturned Chevrolet, Ford Tudor, and a Freightliner truck in 1937; and others. Of particular interest are a whole series of photographs of two crumpled and mangled 1940 4-door sedans on an icy Michigan highway in the winter of January, 1941, taken and signed by John W. Mitchell of Mitchell photographs, with extensive notes on versos. Car Wrecks, and accident fatalities were far higher during the 1930s and 1940s then the present day, with nearly 3 times the number of incidents and deaths as compared to the 21st century. Often the roads were in poor or rudimentary condition, brakes were insufficient, the suspension systems were decidedly inferior to later model cars, in addition to the fact that seat belts were optional equipment which did not come with the sale of the cars, and most drivers did not use them if they were present. Fehling (1880-1957), was a Michigan attorney, prosecutor, and a member of the Michigan State Senate from 1935-1938, and was an unsuccessful candidate for Circuit Court Judge in 1941. Fine, bright, tight, well-presented group of accident photographs that occurred on Michigan's highways.

Recollections Of A Handcart Pioneer Of 1860. With …
by Mary Ann Hafen