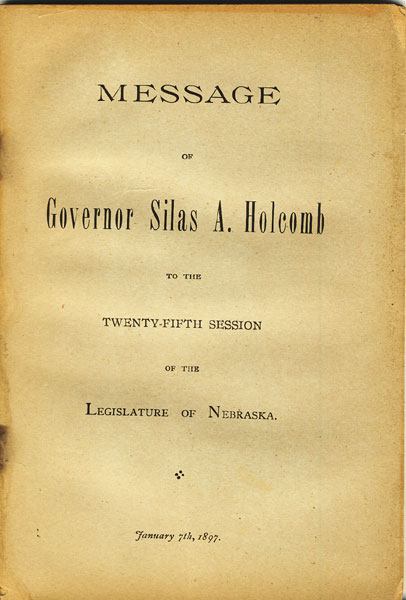 Message Of Governor Silas A. Holcomb To The Twenty-Fifth Session Of The Legislature Of Nebraska

January 7, 1897. 8 1/2" x 5 3/4" in gray printed wrappers. 71 pp. This message discusses numerous topics to include the adoption of the Australian ballot system in order to better purify elections; relief of drought sufferers and ways to offer relief; irrigation; Nebraska's finances; laws for better methods of levying and collecting revenues necessary to conduct government affairs of the state; depository law; the necessity of expenditures in numerous state institutions; a permanent school fund; the University of Nebraska; Nebraska's National Guard; live stock inspection laws; the Trans-Mississippi Exposition; etc. Over five pages of individuals pardoned or sentence commuted by Governor A. Holcomb. Offers offenders' names, crimes, sentences, and individuals who recommended change in sentence. In 1894 Silas Holcomb was elected Governor of Nebraska. He was re-elected in 1896. During his tenure, sounder financial policies were initiated and corruption and mismanagement in the state treasurer's office was addressed; reforms in state government programs were initiated; the Sheldon school land bill was sanctioned; reform policies were initiated in state government programs; fiscal management was endorsed; and corruption in the state treasurer's office was addressed. No legislation calculated to demoralize business was allowed to pass; but instead the administration of the State institutions and the State lands was greatly improved, dishonesty in the handling of the State's finances was relentlessly prosecuted, and generally sounder financial policies were adopted When Holcomb retired from office as governor in 1899, he was promptly elected to the State supreme court. Browning to covers and pages throughout; chipping to corners and edges of front and rear covers along with light soiling; text loose from covers. Very good. A very interesting and information message.

The Canons Of The Colorado
MAJOR J.W POWELL

Souvenir Of "The One Log Cabin"
E. A. WADE

Why People Enjoy Living In Chicago And Northern …