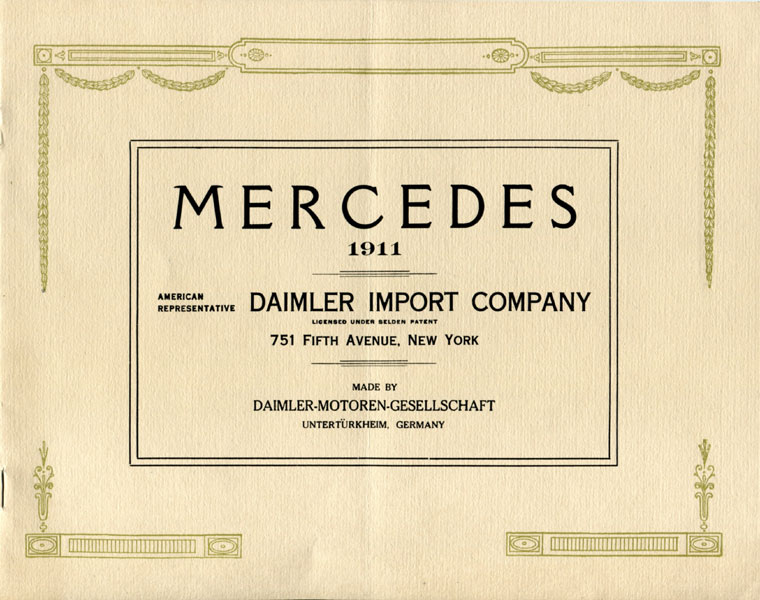 First edition. 7" x 9" printed, tan wrappers, n. p. [8 pp. including covers], illustrated from photographs. This is an exceedingly scarce 1911 Mercedes catalogue when the Daimler Motor Company was quickly moving into the American market. Paul Daimler had become the engineering designer in the ascendance at the company, and produced cutting-edge designs like the 37/90 and 37/95 powered by 4-cylinder 20-90 horsepower engines. Although still producing chain-driven cars, Paul Daimler introduced shaft driven automobiles which became standard equipment in 1910. The catalogue begins with a view of the 1911 Mercedes which won the Emperor Nicholas Cup, and would also win the Vanderbilt Cup Race. The 37/95 chassis, clutch, steering gear, axle, chassis and engine are shown in this catalogue, and at the time was the most powerful production automobile in the world. Mercedes chassis were designed and built by Daimler-Motoren-Gesellschaft, and then shipped to the United States for custom coachwork, such as the famed Labourdette Skiff built for Henry G. Stetson, of Stetson Hat fame. No copies located in Worldcat. See Dennis Adler, Mercedes-Benz, pp. 50-65. Faint vertical crease, else a fine copy of a scarce booklet.

U. S. Coast Survey. Map Of Reconnaissance Of …
by Lieut. O. H Berryman