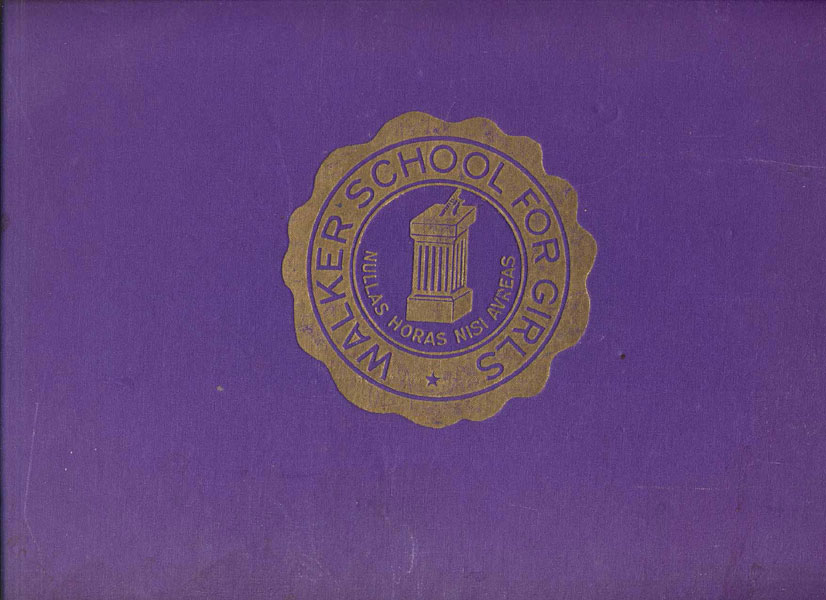 Other works by ELIZABETH BROOKS

12-1/2" x 16-1/2" large format purple scrapbook with the school seal stamped in gilt on the front, bound with a leather ribbon. 100pp. This scrapbook belongs to a student attending the Ethel Walker School for Girls. The student identified as Elizabeth Brooks of Cazenovia, NY on the scrapbook's title page, attended the school from 1918 until her graduation in 1921. The scrapbook contains material from all four years, including nearly 50 photographs. A remarkable record of the life of an upper class girl in early twentieth century America. The school was founded in 1911 in Lakewood, New Jersey, by Ethel Walker. Walker was a Bryn Mawr graduate whose vision of a changing world for women inspired her to create a school where young women would receive a rigorous preparation for college and create the foundation for lifelong learning and intellectual curiosity. In its first year the school's student body consisted of just 10 girls. The school quickly outgrew its first home and in 1917 moved to its present site on the former Phelps-Dodge estate in Simsbury, Connecticut. The scrapbook begins with a register containing the holograph ink signatures of approximately 60 of Elizabeth Brooks' classmates, many with inscriptions that are quite humorous. The bulk of signatures are dated March 3, 1919, with the origin of the scrapbook likely to be around that date. Following the register are monthly calendar pages dated for the 1920-21 academic term, with holograph notations on many of the days, giving an outline of the events of Brooks' final year at the school. The scrapbook proceeds in roughly chronological order, with material tipped or laid-in to every page. It begins with a page titled "Initiation Nov. 21st '18" and tipped in holograph ink note titled "Regulations for Elizabeth Brooks Greenhorn!" detailing the light hazing she would have gone through as a new student. It is followed immediately with photographs of the initiation, which seemed to consist of the girls having to wear their school uniforms backwards. A wealth of material is contained in the pages, including cards and invitations to school events and parties, with Valentine's Day featuring prominently in all four years, homemade artwork, both tipped-in and drawn directly on the page, stickers, clippings of newspaper articles and illustrations, mimeographed prayer sheets, napkins, pressed flowers and leaves, and numerous candid photographs of classmates, including initiations from 1919-1921, holograph notes from classmates, and what appears to be a satirical boy's newspaper. With regard to the academic activities, the scrapbook features numerous school bulletins, programs for recitals, plays, and horse show and gymkhana competitions, all in keeping with the school's mission to provide a comprehensive education for young ladies. This includes several large photographs of various plays and musicals performed at the school, showing girls in costume and playing both male and female roles. Programs for the 1920 commencement, where Ms. Brooks' received a prize for Commercial Mathematics, and the 1921 commencement, where she received prizes for Order and Neatness and Advanced Piano, as well as a diploma for the General Course are tipped-in. Other than these mentions, and despite her obvious interest in performing arts, Ms. Brooks' name does not appear in the scrapbook. Instead, she has added holograph notations to nearly every page, detailing the events or time of year, identifying many of her fellow students in photographs, and providing a broad cultural history of life at an all girls' prep school. Very good, showing signs of use including rubbing and fraying to the edges and some light damp-staining. Interior pages generally very good plus or better, with the material ranging from very good to fine condition. Photographs generally near fine or better, various sizes, with the theater photographs being 10-1/4 x 8." A wonderful collection.

Honor The Past .... Mold The Future. (Cover …
GUY AND DONNA (EDITORS) ANDERSON