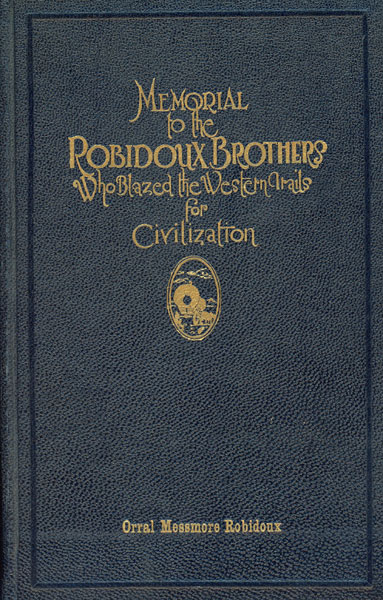 First edition. 8vo. Cloth, titles stamped in gilt on the front cover and spine, dark brown front and rear endpapers, 311 pp., illustrations from old photographs, map. An outstanding history of the experiences and many historical contributions made by various members of this famous Missouri family. Joseph Robidoux III was the original founder of St. Joseph, Missouri. He was identified in the journals of such famous explorers as Father Marquette, Lewis & Clark and Zebulon Pike. An important figure in the development of the early fur trade along the Missouri River. Antoine and Louis Robidoux both pursued the Santa Fe trade. Antoine later trapping and trading throughout Colorado and Utah before returning to St. Joseph, while Louis settled in Santa Fe until 1843 when he headed for California, settling in what is now the San Bernandino area. Many other members of the Robidoux family are covered here, many of whom are linked to the early development of the Missouri River and Rocky Mountain fur trade, and/or the development of regular trade with Santa Fe and Chihuahua, Joseph Robidoux, Charles Robidoux, Mitchell Robidoux, Antoine Robidoux, Louis Robidoux, Julius C. Robidoux, Julius Robidoux, Joseph E. Robidoux, Francis B. Robidoux, Edmund Robidoux are among the many examined here. An increasingly rare and important history of the lives of such primary contributors to early fur trade exploration and development, as well as first-hand contributors to the development of the Missouri-based trade with Santa Fe and Chihuahua, Mexico. Fine bright copy without dust jacket, as issued. Published in a small edition for family and friends. This copy, #98, appears on the presentation page and is neither presented to anyone nor signed by the author. Handsome copy.

The Early And Later History Of Petroleum, With …
by J. T Henry