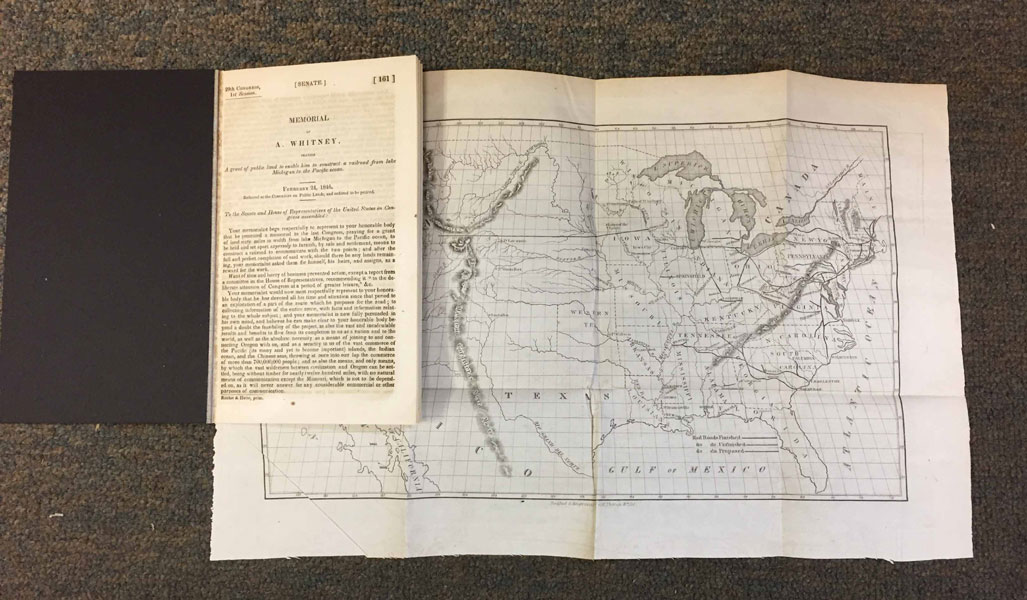 Memorial Of A. Whitney, Praying A Grant Of Public Land To Enable Him To Construct A Railroad From Lake Michigan To The Pacific Ocean

Other works by A. WHITNEY

First edition. 8vo. Senate document 161, 29th Congress, 1st Session, February 24, 1846. Hardcover binder, titles stamped in gold gilt on front cover, 10 pp., large folding map of the proposal at the rear. Whitney is requesting a grant of land sixty miles in width from Lake Michigan to the Pacific Ocean,"to be held and set apart expressly to furnish, by sale and settlement, means to construct a railroad to communicate with the two points; and after the full and perfect completion of said work, should there be any lands remaining, your memorialist asked them for himself, his heirs, and assigns, as a reward for the work." The folding map is a map of the United States that shows railroads finished, railroads unfinished, and proposed railroads. Asa Whitney (1797-1872) was in the mercantile business in New York City and "recognized the necessity of a railroad to the Pacific, and was the first to suggest its feasibility, and from 1846 till 1850 urged it upon congress, the legislature of several states, and the public, by personal influence and his writings. He was finally instrumental in securing appropriations in 1853 for the first surveys of the northern, southern, and middle routes, and lived to see communication opened from sea to sea in 1869." ... Appleton's Cyclopaedia of American Biography. Both map and the text are in fine condition.