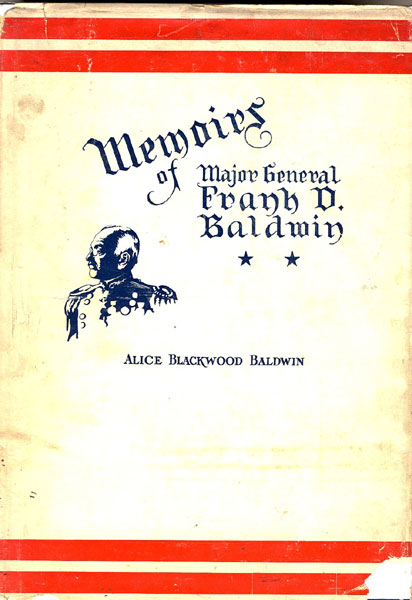 Memoirs Of The Late Frank D. Baldwin, Major General, U. S. A.

First edition. 8vo. Light blue cloth, titles stamped in gold gilt on the front cover and spine, decorated endpapers, xv [3], 204 pp., frontis. [portrait], foreword, tribute, author's preface, illustrated, portraits, index. Foreword by Major General Hunter Liggett, U.S.A., Retired. Edited by Brigadier General W. C. Brown, Colonel C. C. Smith and E. A. Brininstool. General Baldwin joined the Union Army in 1861 and was mustered out in June of 1865, with the rank of Lieutenant Colonel at the age of 22. After the Civil War he entered the Regular Army and attained the rank of Captain 5th Infantry in March 1879. He led troops in numerous battles with Indians throughout the West. His actions in an attack on an Indian village on the Red River in Montana on December 18, 1876, earned him a brevet of Captain. Baldwin served with distinction under General Nelson A. Miles as chief of scouts during campaigns against Sitting Bull and Crazy Horse. He was eventually advanced to the rank of Major General, after which he retired from active duty. Baldwin won two Congressional Medals of Honor during his active service time. Howes B57 says "General Baldwin campaigned against Indians all over the West and was the only officer to receive twice the Medal of Honor." Photographs include a picture of "Yellowstone" Kelly, a scout from 1876-1881 on the Yellowstone River, Montana, and one of Buffalo Bill taken in 1881. A fine, bright, square copy in the elusive dust jacket with a chip at head of spine that wraps around to the top edge of the rear panel, and a chip to bottom corner of the front panel. The dust jacket blurbs and illustration on the rear panel are seldom seen.