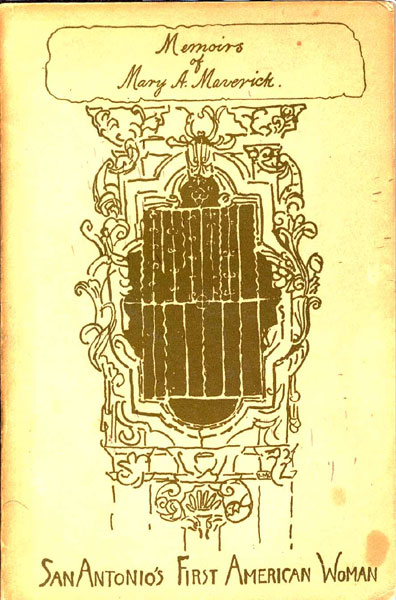 by Rena Maverick (Edited By). Green

First edition, first issue. Original decorated wrappers, 136 pp., preface, frontispiece, photo plates. "Born in Alabama, Mary moved to San Antonio in 1838 after marrying Samuel Maverick, a veteran of the Texas Revolution. Sam was a leading figure in the new Republic. He surveyed lands in the distant West and legislated in Austin. Because he was often away, Mary faced the challenges of raising a family alone. Mary chronicled her life in her diaries, which have become an important source for historians. She witnessed the bloody Council House Fight of 1840, a turning point in relations between Texians and the Comanche. She also writes about Jack Hays, Juan Seguin, and Mirabeau Lamar; notable figures of Texas history appear in her pages not as distant monuments, but as friends and neighbors. Mary Maverick worked in other ways to honor Texas history. She helped save the Alamo from development. She also promoted the Battle of Flowers ... an annual parade still held in San Antonio commemorating the battles of the Alamo and San Jacinto." Basic Texas Books 140 says, "These memoirs of the wife of Samuel Maverick comprise one of the most interesting and important narratives in Texas in the 1830s and 1840s." Herd 1460 says, "An appendix gives the history of her husband's experiences in his cattle venture, and the true origin of the term 'maverick' as applied to unbranded cattle." Much on San Antonio, Texas. Spine browned else a very good, tight copy. Very scarce item.

The Pecos Ranchers In The Lincoln County War
by T. Dudley Cramer

A Coffin Full Of Dollars.
by Joe. Millard

Cowpokes, Nesters, & So Forth.
by Judge Orland L. Sims