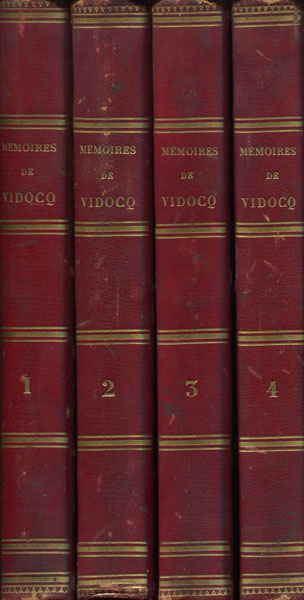 All four volumes are first editions. Each is 8vo. Volume One is compiled from Vidocq's notes by Emile Morice; Volumes Two, Three, and Four are by Louis Francois L'Hertier. Each is bound in 1/4 uniform red leather with maroon and red marbled boards, marbled endpapers. Gold gilt spine lettering, and ruled lines. Volumes One to Three are signed by Vidocq as called for. Engraved portrait of Vidocq as the frontispiece of Volume Four. Vidocq is regarded by Haycraft/Queen as "The Grandfather Of The Detective Story." Vidocq rose from a life of crime to Chief of the Surete and innovator of many scientific procedures to catch criminals. Vidocq (1775-1857) had a tremendous influence on contemporary and later authors of the genre: "Poe, Hugo, Balzac, Dumas, Dickens, Collins, and Doyle. The fullest and most direct fictional expression of the Vidocq influence, however, occurred in the works of his compatriot, Emile Gaboriau (1833-1873)."- Murder For Pleasure p.29 -30. Bindings a little scuffed on the edges, but bright and unfaded. The contents complete with all half titles. Spotted throughout and with a previous owner’s ink stamp on the title page of each volume. Bookplate on the pastedown of all four volumes. An attractive very good set. A hugely popular character and a very influential story. Balzac’s character Vautrin is based on the convict-policeman. A Haycraft Queen Cornerstone.