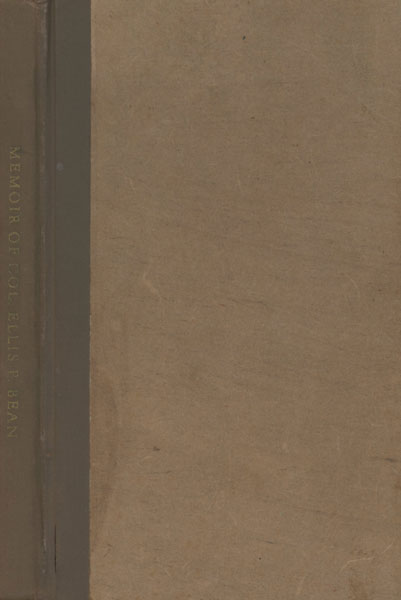 Memoir Of Col. Ellis P. Bean, Written By Himself, About The Year 1816

Publication: The Rein Company for The Book Club of Texas, 1930, Houston

First edition. 8vo. Limited to 200 numbered copies of which this is number 191. The first publication of the Book Club Of Texas. Two-tone quarter cloth and paper over boards, titles stamped in gilt on the spine, [6], 110 [2] pp., frontispiece, illustrated. The first publication of the Book Club of Texas. Peter Ellis Bean (or Ellis P. Bean), filibuster and Mexican revolutionary, was born to Lydia and William Bean, Jr., on June 8, 1783, at Bean Station, Tennessee. In 1800 he joined Philip Nolan's last filibustering expedition to Texas, lured by promises of wealth from captured mustangs and by talk of gold and silver. He was captured by the Spaniards, established residences in both Mexico and in Texas, and became a minor, though colorful, figure in the history of both regions. About 1820 he married a Tennessean, Candace Midkiff (or Metcalf), and they eventually had three children. They lived in Arkansas Territory near the Red River, and then the family moved to East Texas in 1823. There Bean served Mexico again as Indian agent. He persuaded the Cherokees to remain neutral during the Fredonian Rebellion. By 1826 the Bean family lived on the Neches River in the Nacogdoches district. Bean's Prairie, also known as Bean's Creek, was a rural community on Beans Creek west of Alto in southeastern Cherokee County. Peter Ellis Bean settled there about 1839. Boards faintly soiled else a fine, tight copy.