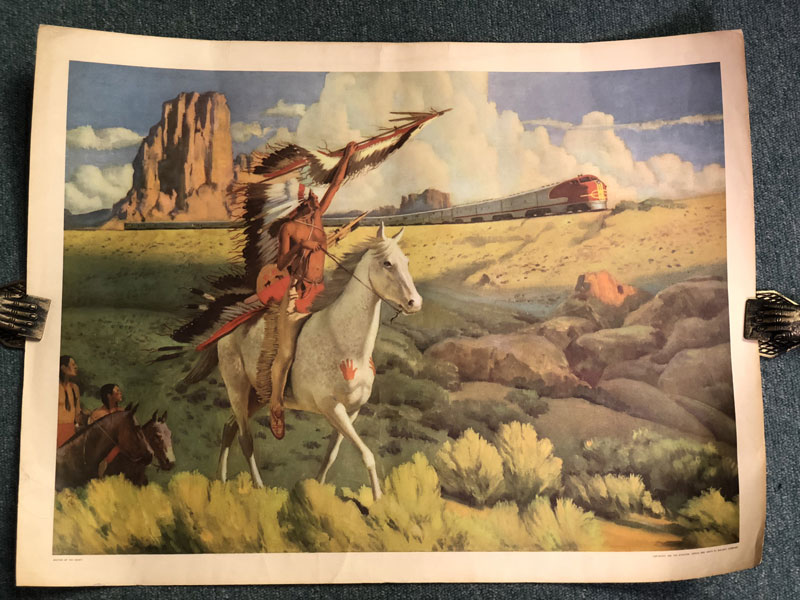 Meeting Of The Chiefs [Caption Title]

18" x 24" color print. An attractive print issued by the Atchison, Topeka, and Santa Fe, celebrating the railroad's sleek, modern trains, but also highlighting the disruptive force of technology on a formerly pristine frontier. It was said of the Transcontinental Railroad (completed in 1869), that it destroyed traditional conceptions of time and space by being able to move people and goods so quickly through vast distances. In this image, created eighty years after the laying of the Golden Spike, time and space are once again disrupted, as modern train design confronts an image of three Native Americans who appear more at home in the mid-nineteenth century than the post-World War Two era. The print shows a long Super Chief passenger train cutting through a southwestern landscape with Monument Valley-type buttes rising in the background and three Native Americans in the foreground. The most prominent of the three Indians, atop a trotting white horse, wears a long flowing headdress, and holds a spear aloft, pointed toward the train. Though the chief is moving forward the train is drawn in such a way as to clearly outpace him, alluding to the triumph of modern technology over the abilities of man and beast. The meaning of the chief's gesture seems a bit unclear to this viewer - it is hard to tell whether he is saluting the train or cursing it. A captivating western image. Neat, expert repairs on verso to the four corners. Short repaired tear in upper margin (not affecting the image), repaired two-inch tear in lower left, just into the image. Very good.

The Art Of Tom Lea. With An Introduction …
Kathleen G. Hjerter [Compiled By]