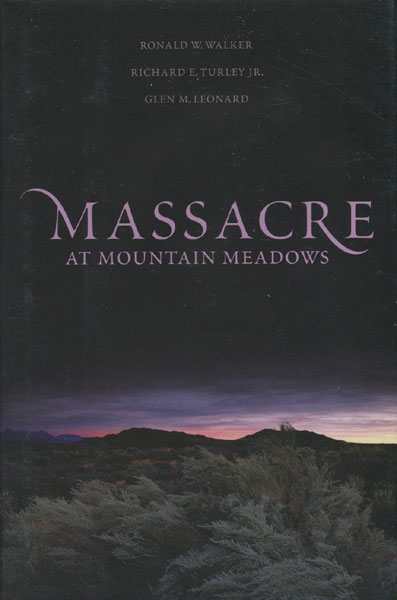 First edition. 8vo. Signed by each of the authors on the title page. Two-tone black quarter cloth and purple paper over boards, map of the emigrant trail from Arkansas on endpapers, xvi, 430 pp., preface, illustrated, plates, portraits, maps, epilogue, acknowledgments, appendices, abbreviations used in notes, notes, index. "On September 11, 1857, a band of Mormon militia, under a flag of truce, lured unarmed members of a party of emigrants from their fortified encampment and, with their Paiute allies, killed them. More than 120 men, women, and children perished in the slaughter." "Three Mormon scholars have thoroughly researched one of the most shameful events in Mormon history. They have produced a very detailed, insightful, and balanced account of the events leading to the Mountain Meadows Massacre of 9/11/1857." "Massacre at Mountain Meadows offers the most thoroughly researched account of the massacre ever written..... This gripping narrative offers fascinating new insight into why Mormon settlers in isolated southern Utah deceived the emigrant party with a promise of safety and then killed the adults and all but seventeen of the youngest children. Throughout the book, the authors paint finely drawn portraits of the key players in the drama." As new, in dust jacket.

Ho For The Klondike. A Whimsical Look At …
James B. Stanton [Prepared By]