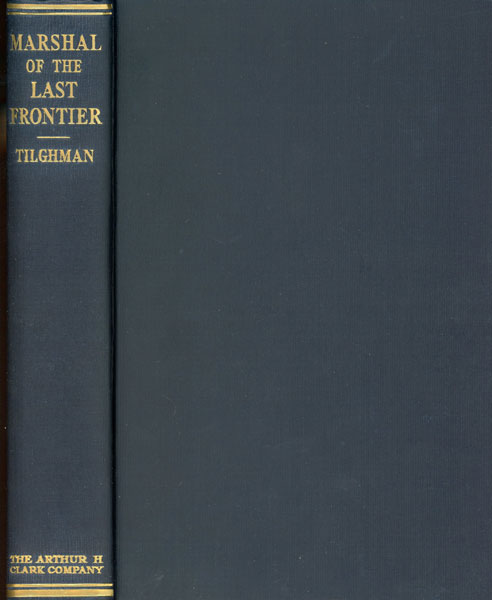 Marshal Of The Last Frontier. Life And Services Of William Matthew "Bill" Tilghman For 50 Years One Of The Greatest Peace Officers Of The West

by Zoe A. Tilghman

First edition. 8vo. Cloth, 406 pp. plus a large folding map at the end, frontispiece (portrait), plates, ports., facsm., index, half-title. "Western Frontier Series III," publisher's device. Fine biography of a worthy subject. Tilghman was a buffalo hunter, scout, plainsman, Marshal of Dodge City, deputy U.S. Marshal in Indian Territory, sheriff, police chief, and film maker. He was killed in the line of duty at the age of 70. He was famed for courage and high integrity. Bat Masterson called him, "the greatest of us all." Adams ONE FIFTY 137 says, "This book, the complete biography of this noted peace officer, tells about his experiences with the gunmen of Dodge City, the outlaws of Oklahoma, and about his tragic death. The best book done on Tilghman." "Tilghman was an important law officer in Oklahoma. This biography by his wife is surprisingly unbiased. He had association with many of the most notorious outlaws and best lawmen in the West. In addition, he played a prominent part in buffalo hunting, railroad building, the Dull Knife raid, the Battle of Adobe Walls, cattle ranching in the southwest and Mexico, and early promotion of motion pictures."--Clark/Brunet. As new, bright, tight copy.

Phil Scott, The Indian Detective. A Tale Of …
by Judson R. Taylor

The Sweet Singer Of Michigan Bibliographically Considered
by A. H. Greenly