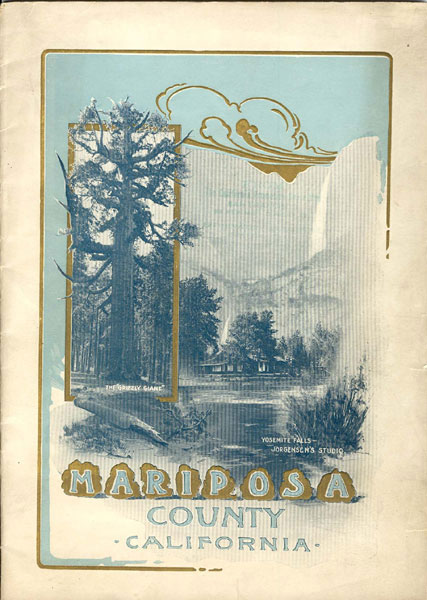 Quarto. Color pictorial wrappers with gold gilt embossing to front and rear wrappers. 52 pp. including wrappers. Black and white photographs. Heavy information on mining. Advertisements. Double column text. Describes the history of Mariposa County. Much information about Yosemite to include Yosemite Valley, fruits, hotels, and distances to points of interest in and about Yosemite via carriage drives and trail trips. Other places described include the Sentinel Hotel, Lake Tenaya, several trips from one place to another within the Mariposa County; the Mariposa Estate or Fremont Grant which occupies a unique position in the mining history of the world. The mines include the Princeton which has been the largest producer on the Grant; the Mariposa which is best known for being discovered by Kit Carson, the scout, Alexander Gody and James Duff in 1849; the Mount Ophir and the Pine Tree and Josephine. Information includes the city of Mariposa, its' public schools, livery stable, hotel, et. al.; the Coulterville Mining District, Merced Gold Mining Company, the Virginia Mine and the Reed Mines; the town of Bear Valley which is located in the center of a rich mining section with several mines; the town of Mount Bullion which changed its name to Princeton from the big mine that supports it; Cathey's Valley is a strip of Mariposa County, a large portion of which is farmed producing abundant crops and is also a fine fruit belt; the Quartzburg Mining District which is located on the western side of the county; the Hornitos Gold Mining Company; the East Belt Mines; the Diana Group; the Whitlock, Sherlock and Colorado mining section et. al. Also described are the forests of the Mariposa County. Black and white photographs to include Lake Tenaya, Yosemite Valley from Eagle Peak, Sentinel Hotel, Nevada Fall, Tuolumne Meadows, Yosemite Falls, Mt. Ophir, Benton Mills Power Plant, Mary Harrison Mine, 40-Stamp Mill on Potosi Mine, Quartz Crest of Penon Blanco Peak and Morris tunnel, Mt. Bullion, Triumph Mine, et. al. Light agent's stamp, two closed tears to fore-edge of front wrapper, a 1-1/4" crease to top of spine and overall light soiling, else a near fine, internally clean copy.