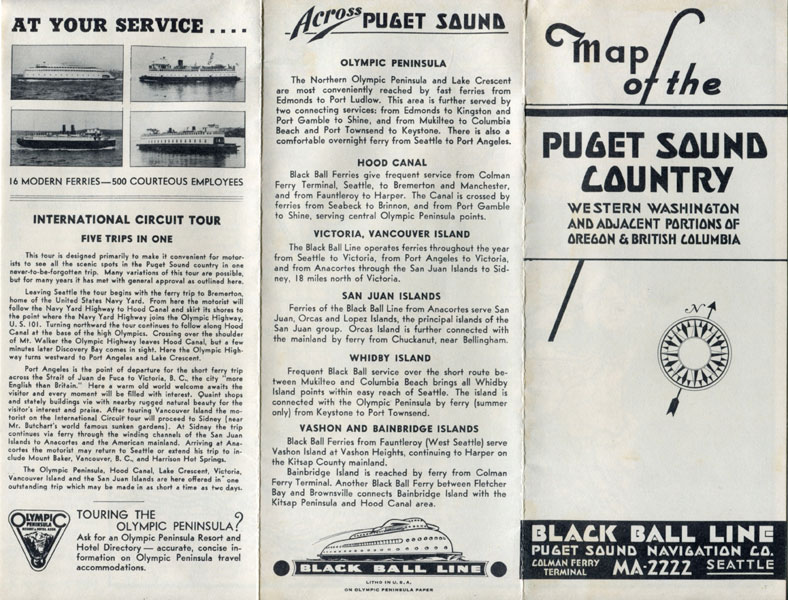 18" x 11" sheet folded to 12 panels. Illustrations. Map. Three panels offer an overview of the tour followed by information on the Olympic Peninsula, Hood Canal, Victoria & Vancouver Island, the San Juan Islands, Whidby Island, and Vashon and Bainbridge Islands. Three panels offer black and white photographs to include the Elwha River, the San Juan Islands, the Olympic Mountains, Vashon Island, Lake Crescent, etc. Opposite 6 panels offers a map of the area and showing the route of the Black Ball Ferries as well as other ferries from Vancouver Island, south to the Strait of Juan de Fuca, Tacoma, and Portland. The Puget Sound Navigation Company operated a fleet of steamboats and ferries on Puget Sound in Washington and the Georgia Strait in British Columbia. Referred to as the Black Ball Line, the Puget Sound Navigation Company achieved a near monopoly on cross-sound traffic in the 1930s. Along the side margin of the map is a mileage chart. Minor soiling to cover wrapper along with very light wear to the extremities. Very good plus.

The Cochise County Cowboys. Who Were These Men?
by Joyce. Aros

A New Route From Europe To The Interior …
Canada-North America