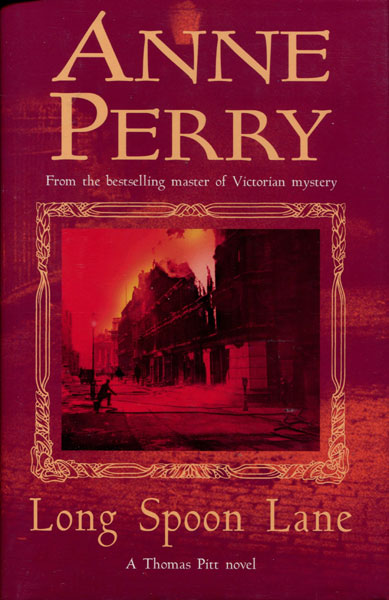 First edition. Signed by the author. Fine in fine dust jacket. Early one summer morning, two bombs explode in East London, shattering most of the houses. Forewarned of an attack, Thomas Pitt of the Special Branch arrives in time to chase the bombers to a rundown apartment in Long Spoon Lane. There, two men are arrested and one shot dead - but who and where is the killer? As Pitt starts to investigate, he uncovers truths more disturbing than the acts of a few misguided idealists. There's a web of corruption within the police force, and all the clues point to Insp. Wetron of Bow Street as its mastermind. Worse, as head of the sinister Inner Circle, Wetron has powerful allies in every sphere, and it's almost impossible to pin his guilt on him. Fears from the attack are amplified by the press, and a bill to arm the London police is rushed through Parliament. Then Pitt's most deadly enemy, Sir Charles Voisey, approaches him with the proposal that they join forces to prevent Wetron from becoming the most powerful man in England. Pitt feels he has no option but to agree.

The Hellfire Papers
by Derek Wilson

Mission To Paris.
by Alan. Furst

The Outside Man.
by Richard North. Patterson

My Wife Ethel.
by Damon. Runyon