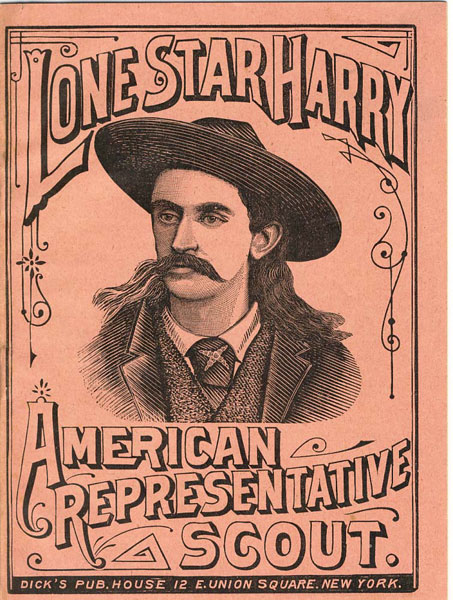 First edition. 12mo. Original pictorial pink wrappers, 16 pp. Born in 1855, in what is now the town of Eagle Pass, Maverick County, Texas, Lone Star Harry, at the age of fourteen, "was broke in as a cowboy" and worked for the C.C., 63, and other ranges. He worked as a scout for General Crook and various Wild West shows. One of the most important features of this pamphlet is the section entitled: "My Experience on the Texas Cattle Trail, A Picturesque Business Killed by Steam and Iron, Experiences during a Cattle Drive of 3,500 cattle from Texas up to Nebraska." This drive took place in 1882, with Captain Charles King, bound for Ogallala. Includes information on handling cowponies, and tips on how to quiet cattle after a stampede. The section on gun handling advises people to stand with their left side facing a gunman, who will then be unable to hit your heart. In 1890, Lone Star traveled to the East, and began his career as a trick pistol shot for Dr. Solomon's Wild West Show until 1893. Not in Adams Herd or National Union Catalogue. A very scarce and unrecorded cattle narrative and probably for Wild West Show distribution. Very fine copy.

Whips Of The West
by David W Morgan

Arizona 1900 And Bits Of The West
by Gordon Stuart

The Scrub Must Go
Ralph A. Hayne [Agricultural Extension Department]