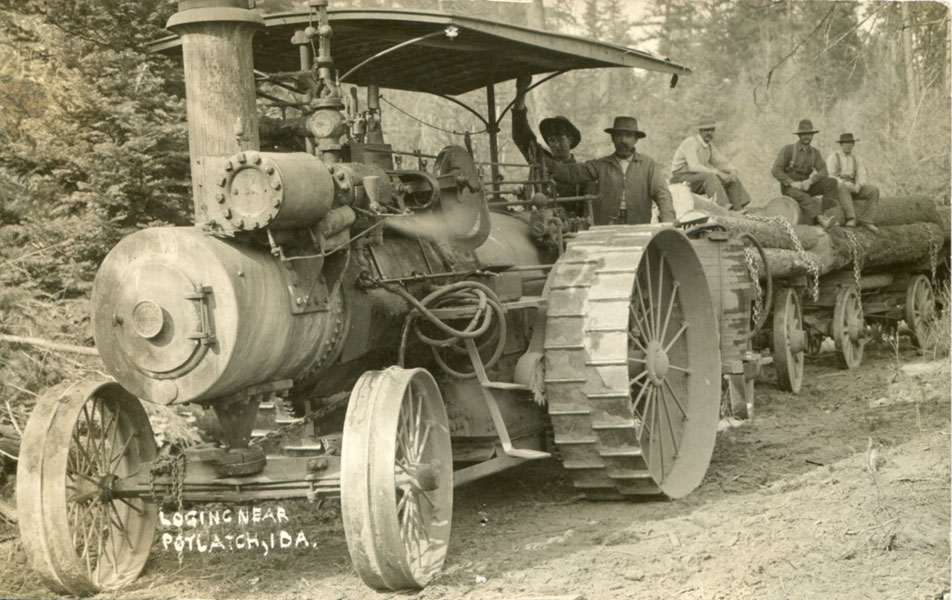 3-1/2" x 5-1/2." Black and white postcard showing five men hauling logs with a Russell Compound Steam Engine #10783. The most recognizable of all Russell equipment is the steam traction engine. From 1882 to 1924, nearly 16,000 traction engines were produced. Available in sizes from 6hp to 150hp, Russell offered engines for nearly every application. Built for everyone from the owner of a small farm to large professional firms both home and abroad. The most common engines were mid-sized, simple cylinder engines. Russell also produced many compound engines, utilizing both a high and low pressure cylinder for power and efficiency. These are the engines that most of you see at steam shows around the country. "The Potlatch Lumber Company, Potlatch, Idaho, was incorporated in 1903 under the laws of the state of Maine, with Charles Weyerhaeuser named as its first president. For timber the company relied on the holdings of the Northland Pine and the Wisconsin Log and Lumber Companies. Soon it acquired mills and timber of Codd Lumber Company of Colfax, Washington, and Palouse River Lumber Company of Palouse, Washington. The Codd mill did not operate and the Palouse mill served only to cut lumber to build the Potlatch town and plant. In 1904 the building of the largest white pine mill in the world began. It was steam powered and driven by belts and shafts. The company believed a company town was a necessary investment and a proper step in labor relations and community improvement." Minimal wear to corners of postcard, the name "Roy" has been erased in the correspondence area else a nice copy.

Bungalow Camps In The Canadian Pacific Rockies
by Betty Thornley

Clifton And The Cliff Mine
by Clarence J. Monette

Across The Plains To California In 1852.
by Mrs. Lodisa. Frizzell