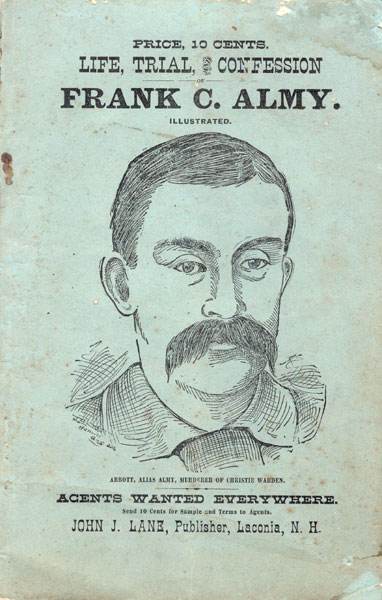 First edition. 8vo. Original light blue pictorial wrappers, 32 pp., illustrated. George Abbott was a young child when he began his career as a thief and by his thirtieth birthday he had spent a third of his life in jail. When he left prison he changed his name to Frank C. Almy (the name by which he would be known for the rest of his life) and tried to change his evil ways. He found work working as a farmhand in Hanover, New Hampshire, and fell in love with the farmer’s daughter, Christie Warden. When Christie did not return Almy's affections, he shot and killed her. Almy was arrested and tried for the girl's murder. He was found guilty and was sentenced to hang. McDade's Annals of Murder # 6 says "Almy, a rejected suitor, murdered Christie Warden on July 17, 1891, at Hanover, New Hampshire. He lived for a month in the Warden family barn while posees were searching for him." Large splits at head and toe of spine, wrappers lightly soiled and foxed along with creasing to top and bottom corners or wrappers and pages. An old water stain to top corner of front and rear covers, fore-edges have a few closed tears and minor chips. Good clean copy of a scarce item.

Wanted. The Outlaw Lives Of Billy The Kid …
by Robert M. Utley

Klondike Fever, The Famous Gold Rush Of 1898
by Michael Cooper