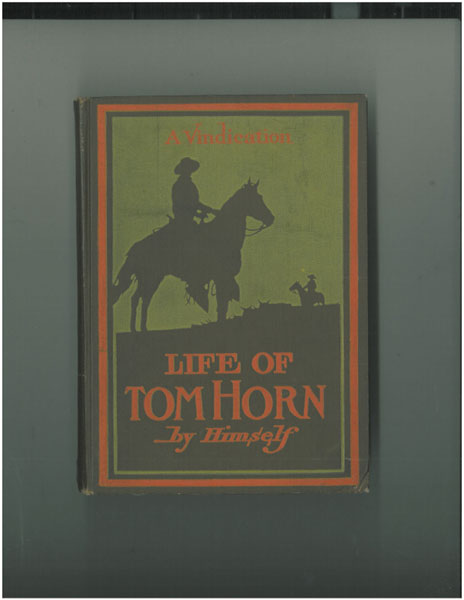 First edition. Color pictorial cloth of which it is said that only 120 copies were published, 317 pp., preface, illustrated [with all 13 plates accounted for]. Declared to be "a vindication," this work is of disputed authorship....some attribute it to Horn himself; others to Horns' friend and employer, John Coble. While still others attribute it to Hattie Louthan, relative of the publisher. This copy includes a typed letter dated Jan. 26, 1925, and signed by Mrs. John C. Coble to Francis Hilton discussing having a movie made about the book. Also she mentions Colonel Gardinier who was a friend of Tom Horn and Al Sieber. On the verso of the letter are three inked hand-written lines signed by Mrs. Coble. Contains much on Tom Horn's days as a scout and interpreter in the Apache Wars in Arizona, New Mexico, and Mexico in the 1870's and 1880's. The remainder addresses Horn's days in Wyoming, with letters from friends attesting to his character as Horn stood accused and convicted of the murder of Willie Nickell. Horn was hanged for this crime on November 20, 1903. A controversial book about a controversial man and a murder conviction that is still debated today. Very light wear to the spine ends. a small "ding" to lower front corner, else a very good copy of a very scarce book.

Forty Miles A Day On Beans And Hay. …
by Jr., Don. Rickey

Constitution Of The State Of Wyoming
John K. Jeffrey [Secretary]

The Great Northwest. A Guide-Book And Itinerary For …
by Henry J. Winser