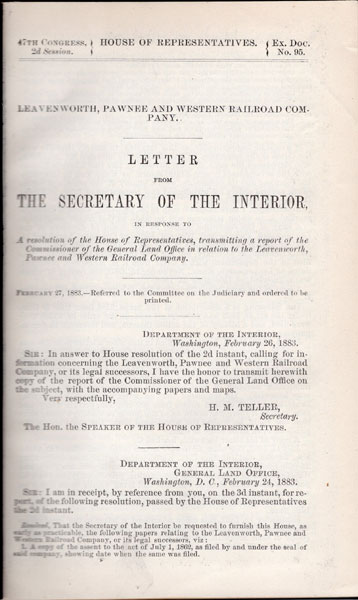 Letter From The Secretary Of The Interior, In Response To A Resolution Of The House Of Representatives, Transmitting A Report Of The Commissioner Of The General Land Office In Relation To The Leavenworth, Pawnee And Western Railroad Company.

H.M. Teller [Secretary Of The Interior]

First edition. 8vo. House Ex. Doc. No. 95, 47th Congress, 2d Session. Quarter cloth and boards binder, titles stamped in gold gilt on front cover, 19 pp., two foldout maps. Proposed routes for the railroad from Lawrence, Kansas along the left bank of the Kansas River, to Fort Riley, then designating two routes, one up the Republican Fork, the other up the Solomon Fork. Request was made for withdrawing lands adjacent to the proposed route for use by the railroad. The larger foldout map shows the state of Kansas in 1879, and is bordered by Nebraska, Colorado, Missouri, and Indian Territory. All county boundaries are outlined in color, along with Indian Reservations, military reservations, railroad limits, railroads completed, towns, etc. The smaller map is of Kansas with rivers and Indian lands detailed. Both maps are in fine condition. A fine copy.

The Central Railroad Of Iowa, Forming, With Its …
Charles C. Gilman [President]

The Break Of Day In Chino. A Collection …
Edwin Rhodes [Compiled And Edited By]