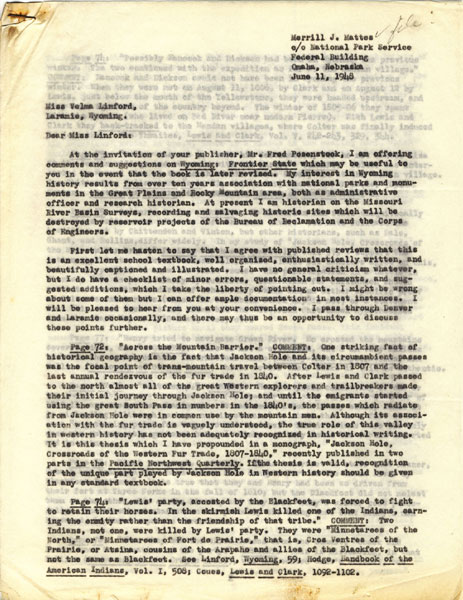 A 6-page typed carbon copy of a letter on onionskin paper, written by Merrill Mattes (not signed) to Velma Linford, author of Wyoming: Frontier State,(published in Denver in 1947 by Old West Publishing Co.) and offering corrections or revisions to errors in her published book, Wyoming: Frontier State. "At the invitation of your publisher, Mr. Fred Posenstock, I am offering comments and suggestions on Wyoming: Frontier State which may be useful to you in the event that the book is later revised." Merrill John Mattes was an historian whose work chronicled the tribulations and triumphs of the pioneers pushing their way toward the Pacific Ocean. From 1840 to 1866 an estimated 350,000 settlers went west through Nebraska's Platte Valley. Mattes documented that history in his meticulously researched books. Velma Linford was born in Afton, Wyoming, and received B.A. and M.A. degrees from the University of Wyoming with graduate work from Wyoming, Denver, and California Universities. She taught in the schools of Afton, Laramie, and at the University of Wyoming, winning several awards in various fields to include folklore and Western history. She lived in Utah at the time of her death. This carbon copy is designated as being Dr. Brayer's copy. Wear to extremities of letter. Much valuable corrections, suggestions and information offered.

Shot In Oklahoma. A Century Of Sooner State …
by John. Wooley