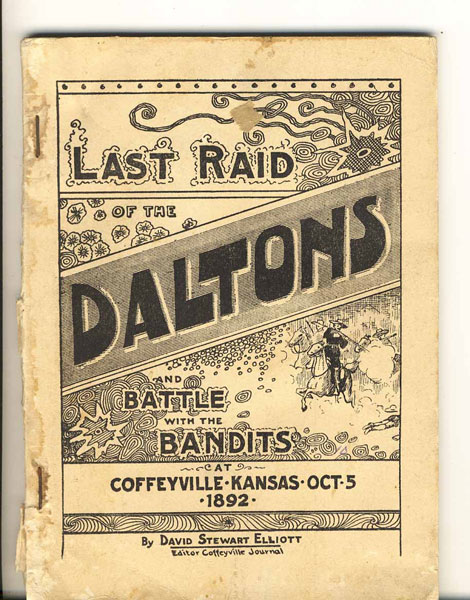 Last Raid Of The Daltons. A Reliable Recital Of The Battle With The Bandits At Coffeyville, Kansas October 5, 1892.

Facsimile edition. 7 5/16" x 5 ½" in cream-colored pictorial wrappers. 66 pp., Foreward. Explanatory. Illustrations. Six Guns 671 says, "The illustrations are on different pages from those in the original, and the facsimile ends with Chapter X, omitting the last two chapters of the original and the plan at the end. The author was the editor of the Coffeyville Journal and was an eye-witness to the battle of the citizens and the Dalton Gang. It is said that he was the first man to reach the wounded Emmett Dalton. He wrote this little book to give an account of what he saw and published it in a limited edition." Graff 1235 says, "This exceedingly rare little book is an accurate account of this battle written ... immediately after the raid when details were fresh." Water staining throughout to edges of booklet. Wrappers water stained at spine edge along with chipping and 1" split to bottom of spine. Wrappers lightly soiled and with light wear to the extremities.

Dakota. "Behold, I Show You A Delightsome Land"
by O.H. Holt