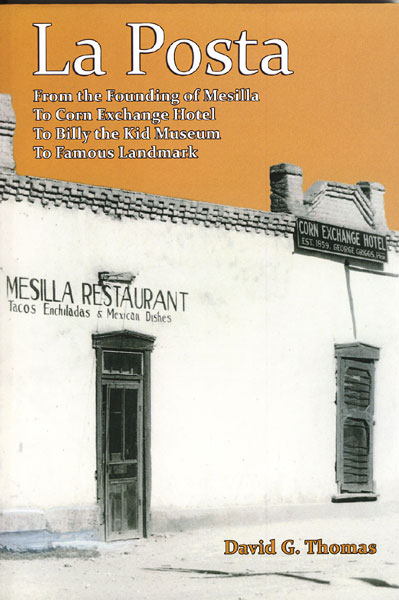 La Posta, From The Founding Of Mesilla To Corn Exchange Hotel To Billy The Kid Museum To Famous Landmark

First edition. 8vo. Signed by the author. Pictorial stiff wrappers,[2], 113 pp., introduction, illustrated, maps, chapter end notes, index. "The story of a building, its people, and its place. The building sits on a lot next to the plaza. The lot is terreno de solar, a grant to a Mexican citizen by the state of Chihuahua, Mexico, on which to build a house. By the terms of the grant, the grantee is obliged to own a horse and a gun. Within a year or so the grantee - and his lot - are no longer in Mexico - they are both in the United States." Over time a merchant buys the home and opens a store. He sells to his partner, who opens Samuel Bean & Company. During the Civil War the Union denounces Bean as a "Johnny Reb," and confiscates the store. John Davis eventually buys the property and establishes the most famous hotel in New Mexico Territory, the Corn Exchange. After the death of John Davis and later his wife, the property is sold and becomes the Billy the Kid Museum. Later it is sold to Katy Griggs for $1 and she opens the most famous eating place in southern New Mexico, La Posta. A most interesting and informative booklet about Mesilla, its buildings, history, and people. As new, unread copy.

Century In The Saddle.
by Richard And Robert H. Mccaffree. Goff