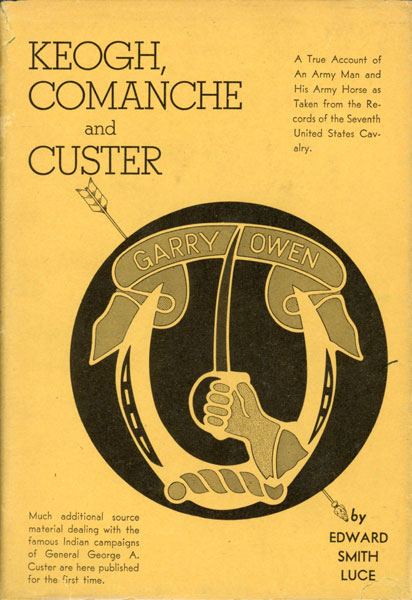 Other works by EDWARD S. LUCE

First edition. 8vo. Inked gift inscription on verso of the title page "Sept. 20, 1941, To my old Dedham townsman Sidney Colburn with best wishes E. L. Luce, Captain USA, Rtd." Limited and numbered edition of which this is copy 239. Original blue cloth, frontispiece [portrait], xvii [1], 127pp., preface, acknowledgments, illustrated, appendices. Extremely important work. On June 25, 1876, General George Armstrong Custer led a detachment of troops from the US Army’s 7th Cavalry to their deaths at Greasy Grass Creek in an engagement now known as the Battle of Little Big Horn. Over 200 US cavalrymen were killed that day as well as several dozen Sioux, Cheyenne, and Arapaho men, women, and children. For the Indians, it was their last and biggest victory of the Great Plains wars. For the United States, it was a defeat that immediately assumed mythic proportions. When the approximately 12,000 Indians camped on the Greasy Grass departed two days later, they took with them all the horses that had not been seriously wounded. The only living thing ... two-legged or four-legged ... that remained at the scene of the engagement was a severely injured bay horse named Comanche that had belonged to US Army Captain Myles Keogh. The author was passionately interested in the Battle of Little Big Horn and served with the 7th Cavalry (1907 to 1910) prior to becoming involved with the Custer Battlefield and its preservation. Three of Luce's appendices add valuable knowledge with regards to the number of recruits in the regiment, and the number killed, wounded, and survivors. First two pages are corner-clipped else a near fine, bright, tight copy in dust jacket lightly reinforced on the verso at three points with cellophane tape, minor wear to the spine ends and corners. else near fine tight copy of a unique, scarce, and important Custer item.

A Texas Ranger.
N. A. JENNINGS