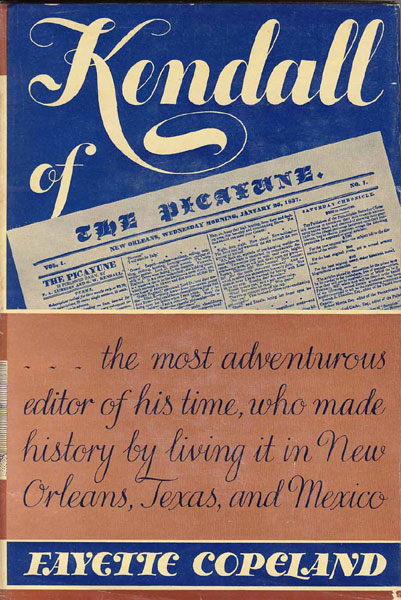 Kendall Of The Picayune, Being His Adventures In New Orleans, On The Texan Santa Fe Expedition, In The Mexican War, And In The Colonization Of The Texas Frontier

First edition. 8vo. Brown cloth, [12], 351 pp., preface, illustrated, plates, portraits, maps, footnotes, bibliography, index. "George Wilkins Kendall, who founded the New Orleans Picayune in 1837, and who rode out from that city to fight for the acquisition of the Republic of Texas, was a restless, impatient and colorful character in an exciting era." Through Kendall's editorial columns the cause of the Republic of Texas was brought to the attention of the American public. The Texas Santa Fe Expedition was organized for the purpose of occupying New Mexico, then under Mexican rule, and Kendall was there. As a captive he was marched off to Mexico when the expedition was defeated at Santa Fe. He published his great account of the Texan Santa Fe Expedition in 1844. When war with Mexico came, Kendall was the first modern war correspondent. His career stands as a symbol of the contribution of the pioneer newspaperman in the building of the nation. Fine in price-clipped, lightly rubbed dust jacket.

From Brothel To Boomtown: Yuma's Naughty Past.
FRANK LOVE

An Economic Study Of A Typical Ranching Area …
BONNEY YOUNGBLOOD