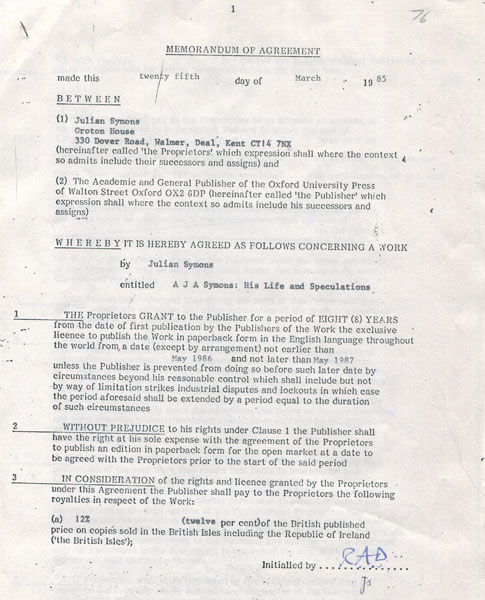 Other works by JULIAN SYMONS

Seventy-five Memorandums of Agreement for books written by Julian Symons. Covers a time period of 1955 through 1989, and includes contracts either initialed or signed by Symons, or both initialled and signed by him. Some of the titles are Bloody Murder, The Paper Chase, The Plot Against Roger Rider, Death's Darkest Face, The Blackheath Poisonings, The Detling Murders, The Colour Of Murder, The Man Whose Dream Came True, Bland Beginning, The Tell-Tale Heart, The Thirty First Of February, The Man Who Killed Himself, and many more including contracts for short stories and foreign publications as well. The file is impressive as each contract consists of several pages. A wealth of information on one of the most respected men of the Mystery genre. Contents are very good.