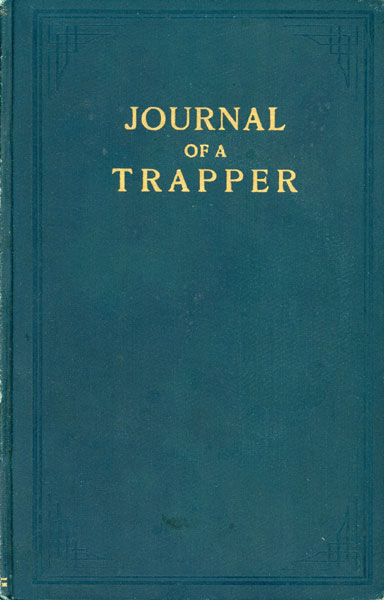 Journal Of A Trapper, Or Nine Years In The Rocky Mountains, 1834 - 1843. Being A General Description Of The Country, Climate, Rivers, Lakes, Mountains, Etc., And A View Of The Life Led By A Hunter In Those Regions

The rare first edition privately printed for the author. 8vo. Printing limited to 100 copies for distribution to relatives, personal friends, historical societies, etc .Original green cloth, titles stamped in gilt on the front cover and spine, 105 pp. plus 4 pp., preface, publisher's note, index to chapters. Born in 1814, Osborne Russell went West with Nathaniel Wyeth's second expedition to the Rocky Mountains and Columbus River regions in 1834. Russell helped garrison Ft. Hall for Wyeth, later joining Jim Bridger's brigade of Rocky Mountain Fur Company men. Eventually Russell became a free trapper for several years, operating out of Ft. Hall when it was owned by the Hudson Bay Company. Russell joined Elijah White's emigrant train to the Williamette River Valley in Oregon in 1843, where Russell helped organize the first provisional government in Oregon in 1843. He completed his journal of a trapper in 1847 or 1848, before going to California. Russell spent the remainder of his life in Oregon and California, where he died in 1892. "The fur trade in its most colorful period."---Wright Howes.---"Russell kept a journal and, an avid reader, his was literate, accurate, observant, perhaps the finest record of mountain man life and adventures extant."---Dan L. Thrapp. A tiny spot to fore-edge of text block else a fine, tight copy housed in a clamshell case with titles stamped in gilt on the spine..

The Strange Adventures Of Mr. Middleton.
by Wardon. Curtis