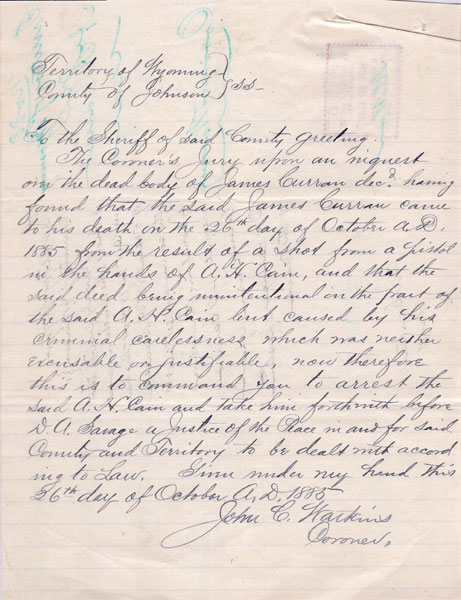 10 3/4" x 7 7/8" warrant and letter from Johnson County, Wyoming Territory. The Johnson County coroner's warrant written in ink and signed by John C. Watkins, Coroner; with Sheriff's Return written in ink and signed by F. M. Canton, Sheriff. Issued and executed October 26, 1885, for the arrest of A. H. Cain, who shot and killed James Curran on October 26, 1885. The coroner says in the letter ".... James Curran came to his death on the 26th day of October A. D., 1885 from the result of a shot from a pistol in the hands of A. H. Cain, and that the said deed being unintentional on the part of A. H. Cain but caused by his criminal carelessness which was neither excusable or justifiable, now this is to command you to arrest the said A. H. Cain ....." Sheriff Canton advises that he has arrested A. H. Cain and taken him before the Justice of the Peace. "As [Johnson County] coroner, John C. Watkins went on 11 April to conduct an inquest into the death of Champion and Ray. While at the TA Ranch and in the performance of his duties, Watkins became ill and died the next day. Early newspaper reports suggested he was poisoned by drinking tainted water from a creek on the ranch or shot by the gunfighters. Mary Watkins, in a letter to the local newspaper on 14 April wrote that her brother had not been well, was "much excited" by the events, and died of apoplexy before ever reaching the bodies of Champion and Ray. John's son Robert, in a letter dated 30 April 1892 described his father in his last hours as being in a state of convulsions. John C. Watkins's funeral was held in Buffalo on 15 April -- the same day as the funerals of Champion and Ray --- and he is buried in Buffalo." --------- From the Virginia Tech Special Collections Library. A few light fold creases and a crease to one corner, else a fine copy. Provenance: Robert J. McCubbin Collection.

The History & Heritage Of Goliad County. Researched …
PRUETT, JAKIE L. AND EVERETT B. COLE [EDITED AND WRITTEN BY]

Letters On Tobacco, For American Lads; Or Uncle …
GEO TRASK