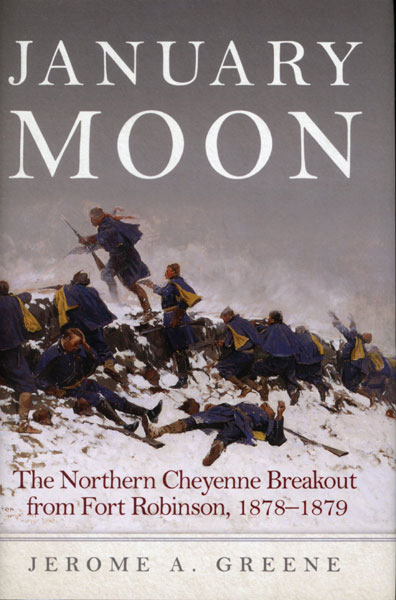 by Jerome A. Greene

First edition. 8vo. Two-tone quarter cloth and boards, Titles stamped in white on the spine, xiv, 333 pp., preface and acknowledgments, prologue, illustrated mostly from photographs, plates, portraits, maps, epilogue, appendices, notes, bibliography, index. In the wake of the Great Sioux War of 1876–77, the U.S. government expelled most Northern Cheyennes from their northern plains homeland to Indian Territory, in present-day Oklahoma. Following mounting hardships, many of those people, under Chiefs Dull Knife and Little Wolf, broke away, seeking to return north. While Little Wolf's band managed initially to elude pursuing U.S. troops, Dull Knife's people were captured in 1878 and ushered into a makeshift barrack prison at Camp (later Fort) Robinson, Nebraska, where they spent months waiting for government officials to decide their fate. On the night of January 9, 1879, in a bloody struggle with troops, Dull Knife's people staged a massive breakout from their barrack prison in a last-ditch bid for freedom. Knowing they faced almost certain death either from the cold winter weather or from the bullets of the army, they were determined not to return to Oklahoma. An engagement at Antelope Creek proved especially devastating, and the helpless people were nearly annihilated. The author turns every stone and provides a vivid and balanced recounting of the events. As new, unread copy in dust jacket.

The Life Of A Horse And Buggy Stage …
by B.W. Allred

A Complete Life Of Gen. George A. Custer.
by Frederick Whittaker

Commanders And Chiefs.
by Elaine. Waterstrat