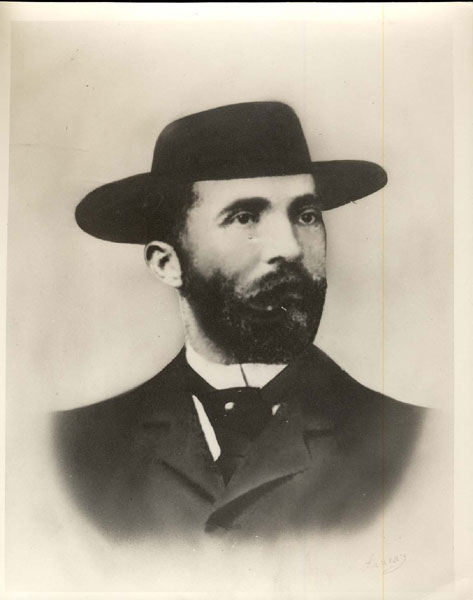 Publication: Taken in September, 1876 in Madelia, Mankato, or Northfield, Minnesota,

Taken in September, 1876 in Madelia, Mankato, or Northfield, Minnesota. This, the first photograph of Jim Younger after his capture, along with his brothers Cole and Bob, outside of Madelia, Minnesota, after their infamous robbery of the First National Bank in Northfield, Minnesota. See the image of Jim Younger shown between pages 40 & 41 of the classic account of the robbery, Robber and Hero, The Story of The Raid on The First National Bank of Northfield, Minnesota by the James-Younger Band of Robbers, in 1876 by George Huntington. An original carte-de-visite image, trimmed by a previous owner to 2" wide x 2.5" high, then protected in a rather ornate 19th century case, typically used with daguerreotypes, ambrotypes, or tintypes. Case in very good condition, with original cloth, hinge intact and original clasp present. Image has a very small card 1.25"W x .5"H, describing image, affixed to the image under Jim's chin, across his upper chest, by a previous owner, many years ago. Otherwise, a clean, very good image. James Younger was born in Lee's Summit or Harrisonville, Missouri on January 15, 1848. Jim rode, with Cole and the James Brothers, with Quantrill's Guerillas. Jim was captured near Smiley, Kentucky and imprisoned until the end of the war. After the war, Jim joined Cole and the James Brothers in several bank robberies. In addition, Jim and brother John confronted 2 Pinkerton men and a Deputy Sheriff in Monegaw Springs, Missouri on March 16, 1874. The resultant shoot-out ended with John Younger and 2 of the 3 lawmen dead. Jim's demise began with the gang's decision to go north and rob The First National Bank of Northfield, Minnesota. Eight or nine men, including Jim, Cole, and Bob Younger, and Frank and Jesse James attempted the bank robbery. The failed attempt ended with the bank teller wounded, the bookkeeper dead, and a citizen dead in the street, along with 2 robbers dead, and several robbers riding hard to escape. Cole and Bob Younger were wounded. Jim Younger and Charlie Pitts stayed with Cole and Bob. Frank and Jesse James split-up from the others and successfully escaped from the myriad of pursuers. Outside of Madelia, Minnesota, Pitts and the Youngers were surrounded by a group of local citizens and lawmen. As the posse closed-in, a gunfight erupted resulting

Thomason: The Autobiography Of A Federal Judge.
RAY, JOSEPH M. [EDITED AND ANNOTATED BY].