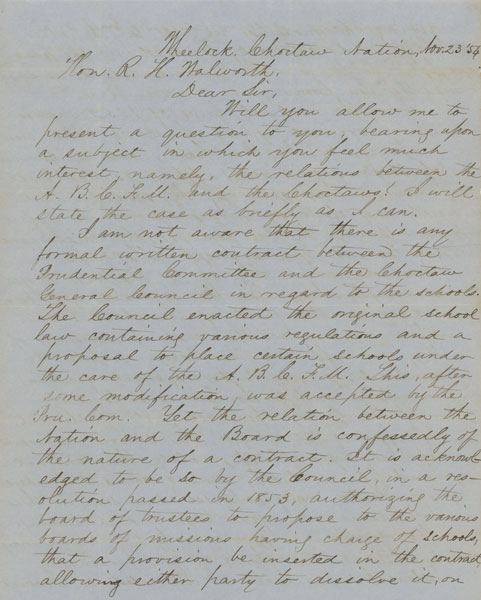 Inked Three-Page Hand-Written Letter Regarding The Choctaw Nation In Oklahoma, 1854

First edition. 8" x 10" letter, 3 pp. including the inked Walworth note at the conclusion of Edwards' letter. The letter is addressed and written to Chancellor R. H. Walworth, Saratoga Springs, New York. Edwards wrote this legalistic letter to a fellow New Yorker who was also a prominent American lawyer, journalist, and politician. He was nominated to the Supreme Court three times by President Tyler, but never affirmed by the Senate. Edwards had just become Superintendent of the Wheelock Seminary for girls in the Indian Territory. It was here that the now "civilized" Choctaw Indians were now comfortably settled after their forced migration via the Trail of Tears a mere twenty years earlier. Edwards talks about strained relations between the Choctaws and the American Board of Commissioners for Foreign Missions. As slave owners, the Choctaws were insisting that no Yankee missionary who came to live among them should deliver any anti-slavery sermons. The Board refused to accept this condition. Several other issues are discussed, among them is a threat to close the Indian school and the possible violation of an implied "contract" with the Indians. "Rev. John Edwards was a graduate of both Princeton University and Princeton Seminary, where he ranked second in his class. On completing his course at the latter institution, he received an appointment as evangelist in the then Indian Territory under the American Board of Commissioners for Foreign Missions. Later he was superintendent of Wheelock Academy. In 1861, however, he was forced to flee from the section because he did not wish to take up arms for the Southern Confederacy, and he spent the next twenty years of his life in California. In 1883, the Presbyterian Church of the United States having assumed responsibility for work in the Choctaw tribe, John Edwards was recalled to Indian Territory, and he remained there until 1896. Aided by a good understanding of Hebrew and Greek, he translated the books of Psalms and First and Second Kings into the Choctaw language, and revised the New Testament, originally translated by Rev. Alfred Wright." (Chronicles of Oklahoma - Vol. 10, No. 3. September, 1932). Folds to the letters, else a significant, early and very readable letter of Oklahoma Choctaw history in very good condition.

Amphibians And Reptiles Of The Us-Mexico Border States. …
Julio A. Lemos-Espinal [Edited By]

"Johnny-Behind-The-Deuce" Guilty Until Proven Innocent.
by Roy B. Young

Nakai Toh. My Days With The Finest People …
by Walter. Gibson