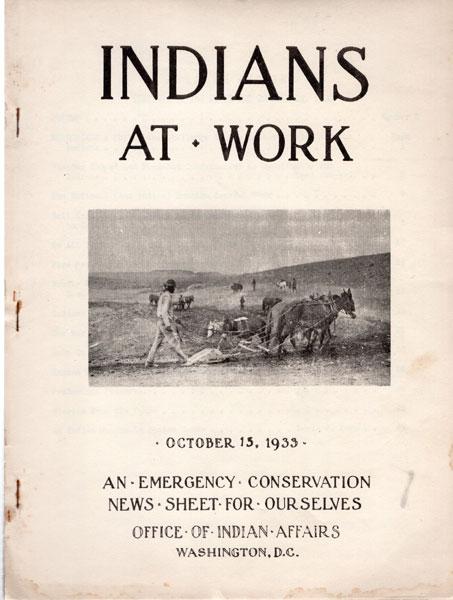 INDIANS AT WORK was published between 1933 and 1945 by the Office of Indian Affairs (later the Bureau of Indians Affairs) and showcased the work of the Civilian Conservation Corps Indian Division. The corps was developed as part of the New Deal effort to counter the effects of the Great Depression by creating public works projects to create employment opportunities. Office of Indian Affairs, predecessor agency to the Bureau of Indian Affairs. These eleven issues plus one are October 15, 1933, November 1, 1933, November 15, 1933, December 1, 1933, December 15, 1933, August 1, 1935, September 15, 1935, October 1, 1935, October 15, 1935, November 1, 1935, November 15, 1935. Each issue has between 32 to 51 pages along with numerous photos. Most of the articles concern the history and culture of the American Indian. Articles include "Snap-Shots From The Camp;" "Family Camp Work In Montana;" "The Program In Arizona;" "The Indian Emergency Conservation Work Program in Figures;" "Indians In The Jobs;" "Indians In Supervisory Positions;" "The National (and Indian) Erosion Control Work;" "Indian Land Needs;" "Winter Work Projects;" "Subsistence Homestead Projects;" "Indian Doll Contest;" "Dancing At Tongue River;" "Place the Responsibility On The Navaho and Watch The Results;" ""Deer Dance in Taos;" "The Shoshone Love Fun;" "From Flathead to Blackfeet;" "Indian Women Making Birch Bark Receptacles;" History of the 4-H Sheep Club in Zuni;" "Recent Trends in Indian Education in the United States;" "Address to Potawatomi Indians;" "I.E.C.W.on the Crow Reservation;" The Poetry of the North American Indian;" "Handling Drought Cattle;" plus hundreds of other subjects. Each magazine is mimeographed and stapled. Minor staining as expected, but overall in very good condition.

What Ever Happened To Baby Harry? The True …
by Melissa Ruffner

Solitary Places Made Glad: Being Observations And Experiences …
by Rev. Henry T. Davis