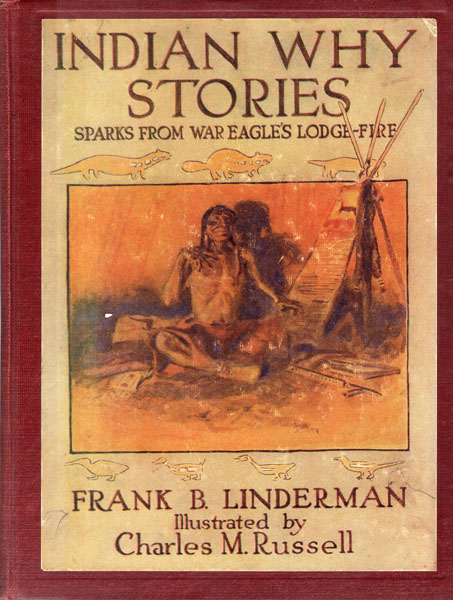 First edition. 8vo. Inked gift inscription signed and dated by the author on the front free fly leaf. Original red cloth, front cover bears a paper pictorial label with lettering in red and a colored illustration, spine titles stamped in gilt, xvi, 236 pp., preface, introduction, frontispiece, illustrated, plates (10 color plates, 8 in the text and the one on the front cover and title page), 12 black & white drawings, words "Published September, 1915" appear on verso of title page. This is an anthology of 22 Native American folktales, compiled by the author from oral stories passed onto him by members of the Blackfeet, Chippewa, and Cree tribes. Linderman (1869-1938) first moved to the Montana territory at the age of 16 working initially as a fur trapper, later serving in the Montana State Legislature, and by 1911 had begun writing his story anthologies, and in 1924 bought the Hotel Kalispell which he would run for two years and where this copy was presented. Gilt on the spine is worn and dull else a very good copy lacking the original dust jacket.

Report Of The Governor Of New Mexico To …
by Governor Edmund G. Ross

Peoria, Here I Come! Memoirs Of Arizona Before …
by Margaret Fine Francis