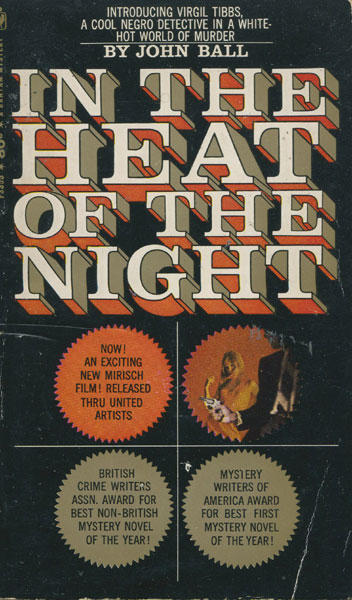 Other works by JOHN BALL

First paperback edition and first movie edition of this award-winning first novel. Signed by the author. Very good in pictorial wrappers. In addition to the best first novel Edgar award the story also received the Gold Dagger award as best non-British mystery of the year. Included is a 13" x 18" studio pressbook from the Oscar-winning film's original release. The pressbook consists of 12 pages of glossy reproduction quality images and text of posters, ad mats, newspaper photos and stories, promotional campaigns, etc. for use by theater managers to market the film to their communities. Although the pressbook devotes almost half a page to this Bantam edition, none of the film's posters, ads, etc. mention the book or its author, crediting only Sterling Silliphant's screenplay. The movie received five of the seven Oscars for which it was nominated, best picture, screenplay, editing, sound, and supporting actor [Rod Steiger], but not for best director or sound effects. The unfolded and unclipped United Artists pressbook and the Bantam movie edition of his first novel are choice items.

La Posta, From The Founding Of Mesilla To …
DAVID G THOMAS