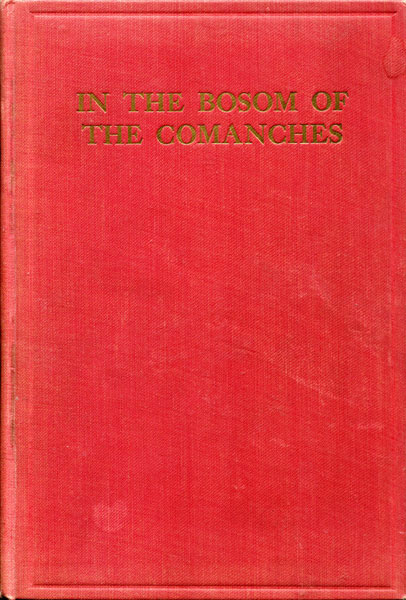 In The Bosom Of The Comanches. A Thrilling Tale Of Savage Indian Life, Massacre And Captivity Truthfully Told By A Surviving Captive. Texas Borderland Perils And Scenes Depicted. The Closing Days Of The Trying Indian Struggles Upon The Frontiers Of Texas

First edition and not to be confused with the 1923 Dallas edition. 12mo. Red cloth, gold stamping on front cover and spine, 145 pp., introduction, frontispiece, illustrated, plates, portraits. In Texas 1865, Babb and his sister were taken captive by the Comanches. Their mother was killed during the raid, and he eventually became a warrior of the tribe. After sometime as a Comanche warrior he was returned to his father. Babb's captivity narrative remains a classic because he was able to directly observe details of Comanche life and record much of it in an objective way. He continued to visit and correspond with tribal members long after his return to white society. There are several photographs of noted Indian chiefs and warriors, information on the Texas Rangers, and much on Quanah Parker. Also much on cowboying, and much valuable knowledge on pioneer women in Texas. Not in Adam's Herd, Graff and Ayer, and most references cite the 1923 edition. Lightly sunned on the spine, else a fine copy.

How To Put The Win In Windows
Dennison Manufacturing Co.

The Texas Rangers
by Chuck Parsons