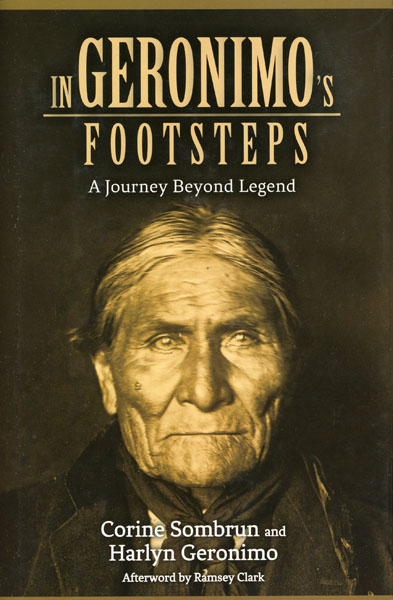 In Geronimo's Footsteps. A Journey Beyond Legend

Other works by CORINE AND HARLYN GERONIMO SOMBRUN

First English-language edition. Originally published in France in 2008. Translated from the French by E. C. Belli. This issue contains an afterword by Ramsey Clark, the former U. S. Attorney General. Two-tone paper over boards, titles stamped in silver gilt on the spine, xiii [3], 280 pp., introduction, illustrated (many in color), epilogue, afterword. "An account of Geronimo's life, from his earliest days in a Chiricahua Apache family and his path as a warrior and chief to his surrender and the years spent in exile until his death, at Fort Sill, Oklahoma. Recounted by his great-grandson, his story is steeped in family history and Apache lore to create a portrait of a leader intent on defending his people and their land and traditions. Ramsey Clark says in a dust jacket promotional blurb, "Harlyn Geronimo's passionate commitment to return the remains of Geronimo, his legendary great-grandfather, from Fort Sill, Oklahoma, where he died a prisoner, to his birthplace and native home at the headwaters of the Gila River in New Mexico is a profound revelation of the endurance of the Native American spirit." As new, unread copy in dust jacket.

Buell's Map Of A Part Of California Showing …
P. A. BUELL

The Billy The Kid Reader
NOLAN, FREDERICK [EDITED BY]

The Story Of Winchester In Virginia. The Oldest …
FREDERIC MORTON