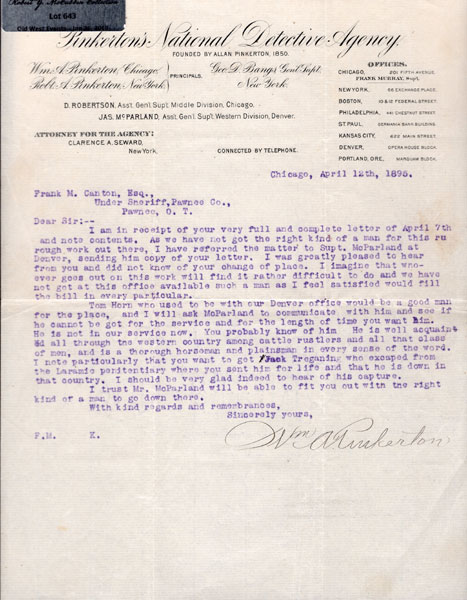 by William A. Pinkerton

A fantastic one-page, 11" x 8 1/2" typed and signed letter on Pinkerton National Detective Agency letterhead Written to the famous "Frank M. Canton, Esq. / Under Sheriff, Pawnee Co., Pawnee, O. T." from and signed in ink by William A. Pinkerton. The letter is dated "Chicago, April 12th, 1895" and references Tom Horn, when he was a good guy. The letter is a reply to Frank Canton, then under sheriff Frank Lake, and he has requested assistance from the Pinkerton Agency. However William Pinkerton doesn't believe he has the right man for the job, as he writes, "I imagine that whoever goes out on this work will find it rather difficult to do and we have not got at this office available such a man as I feel satisfied would fill the bill in every particular." Pinkerton believes he does know of such a man though, and goes on to recommend Canton seek out Tom Horn, writing of Horn, "He is well acquainted all through the western country among cattle rustlers and all that class of men and is a thorough horseman and plainsman in every sense of the word." Pinkerton explains that Horn used to be employed in their Denver office, but is not now currently in their service. It seems that Canton is asking for help to apprehend Jack Treganin, who escaped from the Laramie penitentiary, where he had been sent for life and is currently in Oklahoma Territory and Canton wants him captured and returned to Laramie to serve his life sentence. Some old fold creases else a near fine and important letter. Provenance: Robert J. McCubbin Collection.