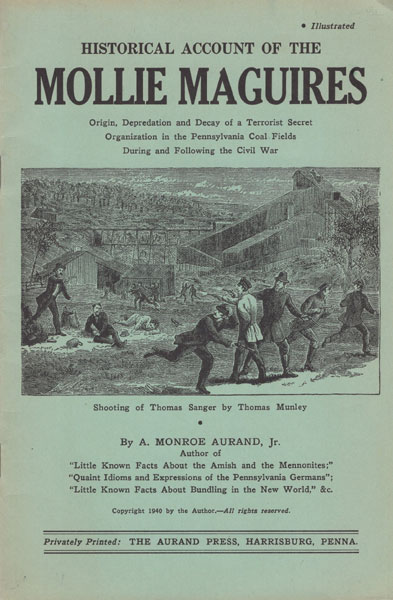 Historical Account Of The Mollie Maguires. Origin, Depredation And Decay Of A Terrorist Secret Organization In The Pennsylvania Coal Fields During And Following The Civil War. (Cover Title)

Other works by AURAND, JR., A. MONROE

First edition. 8vo. Original pictorial wrappers, 32 pp., illustrated, bibliography. The Molly Maguires were an Irish 19th-century secret society active in Ireland, Liverpool and parts of the Eastern United States, best known for their activism among Irish-American and Irish immigrant coal miners in Pennsylvania. Members of the Mollies were accused of murder, arson, kidnapping and other crimes, in part based on allegations by Franklin B. Gowen and the testimony of a Pinkerton detective, James McParland. On June 21, 1877, twenty men suspected of being members of Molly Maguires were hanged in the Carbon and Schuylkill county prisons for first degree murder. The Molly Maguires' name can be traced back to early 19th century Ireland. In the 1840s Molly Maguire, an Irish widow, protested against English landlords who tried to steal peoples land. She headed a group called the "Anti-landlord Agitators" who were best known for getting in bare knuckle fights with their landlords in order to maintain their land and their dignity. Eventually their violence gained notoriety across Ireland, and they later proudly called themselves the Molly Maguires after their leader. During the mid-19th century, America saw a huge influx of Irish immigrants. Many of these immigrants moved to the anthracite coal regions of eastern Pennsylvania. They moved to America hoping they would escape horrible working environments and the brutal tyranny of the English. They soon discovered that the conditions in America were not so different from the conditions in Ireland. With almost no labor or mining laws, the coal mines were extremely dangerous and in decrepit condition. It is believed that the Molly Maguires resurfaced in the Pennsylvania coal region in order to fight for the Irish coal miner's rights. Near fine copy.