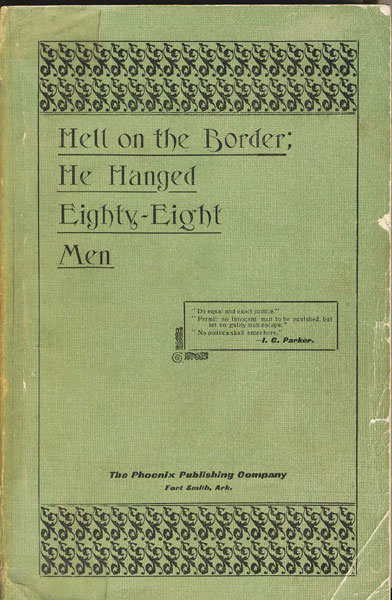 Hell On The Border; He Hanged Eighty-Eight Men.

First edition. Original light green printed wrappers, xiii [blank], 720 pp., frontispiece, author's preface, introduction, numerous illustrations, portraits. Sub-title: A History of the Great United States Criminal Court at Fort Smith, Arkansas, and of Crime and Criminals in the Indian Territory, and the Trial and Punishment Thereof Before His Honor Judge Isaac C. Parker, "The Terror of Law-Breakers", and by the Courts of Said Territory, Embracing the Leading Sentences and Charges to Grand and Petit Juries Delivered by the World Famous Jurist..... "An important source book, all the statistical part of the book, the biographical sketches of those connected with the court and the transcriptions from the court records, were the work of C.P. Sterns and are said to be scrupulously accurate. The same cannot be said of all the narrative written by Harman."---Graff 1785. "Exceedingly rare. The rare original has become a collectors item and is the chief source of practically every book and feature story on the old court and Oklahoma outlaws.... The first edition was soon exhausted because of the reputation of Judge Parker's court.... The book contains much material on the outlaws of Indian Territory who were tried and condemned in Parker's court."---Ramon Adams(1969). "....the great book about Judge Isaac Parker and his federal court at Fort Smith. One of the Dalton brothers was killed while serving as a deputy for the judge and, of course, there is much on outlaws and peace and peace officers."---Jeff Dykes in Rare Western Outlaw Books. Lightly chipped along front fore-edge, spine ends reinforced with archival tape, else a very good, clean copy housed in a cloth slipcase. A rare and important work.

The Notorious Luke Short. Sporting Man Of The …
JACK AND CHUCK PARSONS DEMATTOS