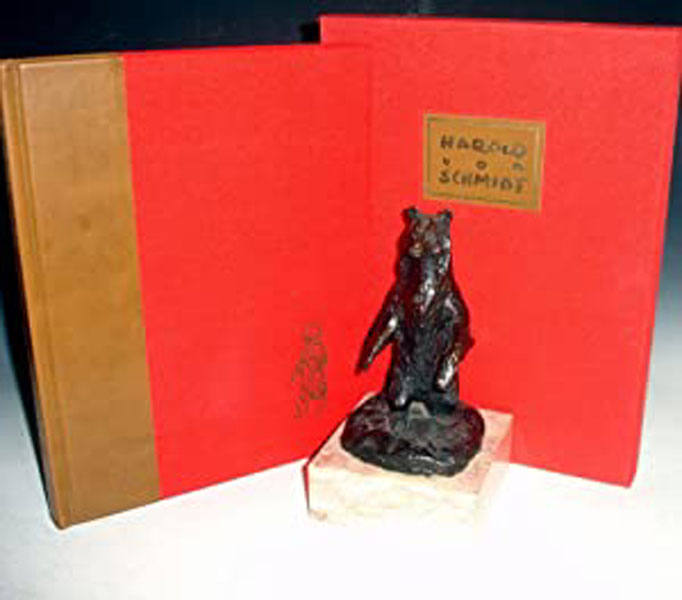 First edition. Tall Quarto, Leather and pictorial red cloths, grey endsheets, xvii [1], 230 pp. "Foreword" by Dean Krakel, "Introduction" by Harold McCracken, preface, bibliography, numerous illustrations by Von Schmidt, and one each by Dixon, Dunn, James, and Russell. Special Limited Edition of 104 copies issued jointly with Von's first sculpture "The Startled Grizzly" and signed by Von Schmidt and Walt Reed. In a handsome slipcase with a Morocco label. The bronze is 7" high with a handsome patina and mounted on a light-colored marble base. The artist was a cowhand and lumberjack in California near the turn of the century and his art reflects this firsthand experience. The Limited Edition book and the bronze are numbered by Harold Von Schmidt. They are numbered copy 96. The winner of the coveted Western Heritage Award for the best Western art book in 1972. This edition was completed in 1972 and was the only sculpture cast by the artist before his death in 1982 at 91 years of age. Very fine copy. DYKES VON SCHMIDT 61.

The Indians' Last Fight, Or The Dull Knife …
by Dennis. Collins

The Unfinished Job. "Stay With It Boys!"
by J.C Dykes

Home On The Range
by John A. Lomax

The West Of Billy The Kid
by Frederick Nolan