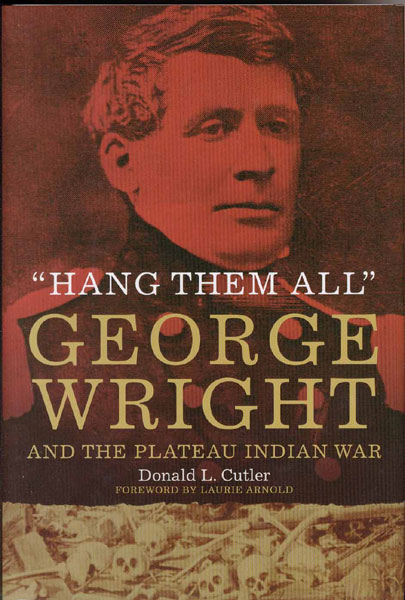 "Hang Them All." George Wright And The Plateau Indian War

First edition. 8vo. Two-tone quarter cloth and boards, titles stamped in gold gilt on the spine, orange front and rear endpapers, xix [blank], 372 pp., foreword, preface, illustrated, plates, portraits, map, conclusion, epilogue, notes, bibliography, acknowledgments, index. Col. George Wright's campaign against the Yakima, Spokane, Coeur d'Alene, Palouse, and other Indian peoples of eastern Washington Territory was intended to punish them for a recent attack on another U.S. Army force. Wright had once appeared to respect the Indians of the Upper Columbia Plateau, but in 1858 he led a brief war noted for its violence, bloodshed, and summary trials and executions. Today, many critics view his actions as war crimes, but among white settlers and politicians of the time, Wright was a patriotic hero who helped open the Inland Northwest to settlement. "Hang Them All" offers a comprehensive account of Wright's campaigns and explores the controversy surrounding his legacy. Over thirty days, Wright's forces defeated a confederation of Plateau warriors in two battles, destroyed their food supplies, slaughtered animals, burned villages, took hostages, and ordered the hanging of sixteen prisoners. Seeking the reasons for Wright's turn toward mercilessness, Cutler asks hard questions: If Wright believed he was limiting further bloodshed, why were his executions so gruesomely theatrical and cruel? How did he justify destroying food supplies and villages and killing hundreds of horses? Was Wright more violent than his contemporaries, or did his actions reflect a broader policy of taking Indian lands and destroying Native cultures? Stripped of most of their territory, the Plateau tribes nonetheless survived and preserved their cultures. With Wright's reputation called into doubt, some north-westerners question whether an army fort and other places in the region should be named for him. Do historically based names honor an undeserving murderer, or prompt a valuable history lesson? In examining contemporary and present-day treatments of Wright and the incident, "Hang Them All" adds an important, informed voice to this continuing debate. As new, unread copy in dust jacket.

Arizona: Its Resources And Prospects. A Letter To …
by Richard C. Mccormick

Chapters From The Unwritten History Of The War …
by Lieut. R. M. Collins