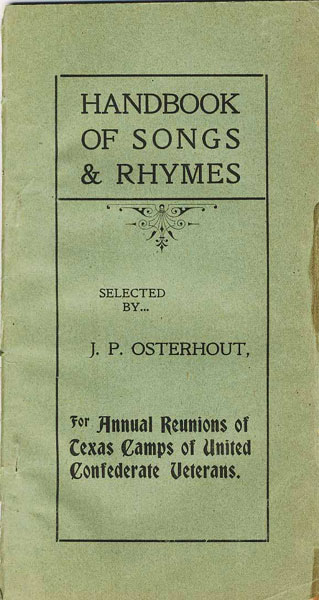 First edition or reprint? Printed wrappers, 29pp. + Index. In the years following the Civil War there were several Confederate veterans organizations in Texas. As the veterans died, their sons and daughters continued to operate associations for the families of those who had been involved in the conflict. The United Confederate Veterans gathered for several years in the late 19th Century and into the early 20th Century to relive the glory days of the struggle within the United States that tore the country apart. Includes: America; Dixie Land; Girl I Left Behind Me; Home, Sweet Home; Old Kentucky Home; Star Spangled Banner; Sweet By And By; When The Roll Is Called Up Yonder; and 18 others. Fragile wrappers. Very good.