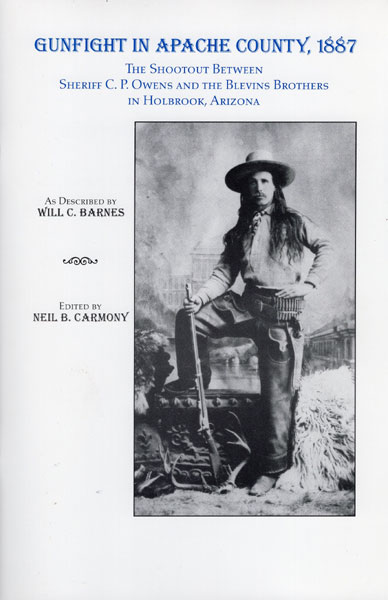 Gunfight In Apache County, 1887. The Shootout Between Sheriff C.P. Owens And The Blevins Brothers In Holbrook, Arizona. As Described By Will C. Barnes

Neil B. Carmony [Edited By]

First edition. Signed by Carmony. Pictorial wrappers, 44 pp., introduction, appendices, sources and references, illustrated, maps, index. The first publication of Barnes' account of this infamous gunfight which occurred in Holbrook, Arizona on Sept. 4, 1887. The Blevins brothers were suspected horse thieves and when Owens went to arrest one of the brothers he was greeted by four men with six-guns in hand. When the shooting stopped Owens was unhurt and the four men were either dead or wounded. Several bystanders watched the action from a safe distance, including rancher Will Barnes, who later wrote about the incident. As new, unread copy.

What's In A Name?
by Thomas H. Cook

The Keys To The Street.
by Ruth Rendell