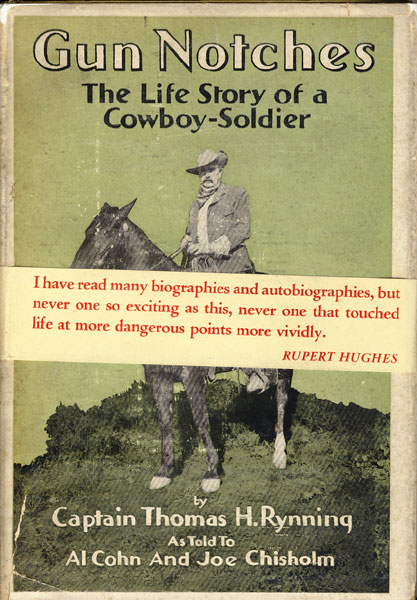 Gun Notches. The Life Story Of A Cowboy-Soldier

Other works by CAPTAIN THOMAS H. AS TOLD TO AL COHN AND JOE CHISHOLM RYNNING

First edition. 8vo. Cloth, xvii [3], 332 pp., foreword. Foreword by Rupert Hughes. Six Guns 1924 says, "Scarce." "This book deals with many of the Arizona outlaws Rynning pursued while serving as an Arizona Ranger." Rynning was one of the most colorful and exciting characters of the American West. He was a cowboy, and Indian fighter, an officer in the Roosevelt Rough Riders, and penitentiary warden, as well as an Arizona Ranger. Former owner's bookplate removed from front fly leaf, else a near-fine copy in the elusive dust jacket which has light wear to the head of spine and extremities, with the rare wrap-a-round promotional band with a promotional blurb by Rupert Hughes. Much "Rough Rider" content and the nicest copy we've seen of this book in years.

Chief Of Police. The Career Of Richard Cdebaca …
DAVID ROYBAL

A Southwestern Land Scam. The Report Of The …
L. BOYD FINCH